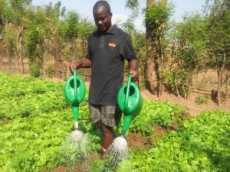 The Pusiga District Department of Agriculture has recorded a significant increase in the yields of staple crops through the successful implementation of the Planting for Food and Jobs and the one Village, one dam policies in the area.

Many farmers in the area who benefited from the subsidised farm inputs increased production and got the services of agricultural extension officers to educate and supervise them on good farming practices.

Mr Zubeiru Abdulai,the Pusiga District Chief Executive (DCE) said this in an interview with the Ghana News Agency (GNA) at Pusiga, after the harvest period.

Mr Abdulai said in order to increase supervision and monitoring of farmers in the district, government provided a Nissan Pick-Up and 13 new motorbikes to enable the extension officers to get to the farmers in remote areas of the district.

Touching on the One Village, One Dam (1V1D) projects, he said out of the 10 dams awarded for construction, eight were completed in the Terrago, Kultamsie, Tesbgego, Kulpelgo and Merantinga, Koose, Kulungugu and Kolnaba communities and were in use to provide farmers with access to water for all year round farming, starting from the 2019/2020 dry season.

He said livestock in the communities did not have to go far in search of water and that also minimised stealing.

Mr Abdulai said the 1,000 metric tonnes warehouse, constructed under the one district, one warehouse policy was about 90 per cent complete and would reduce post-harvest loses and create access for the storage of excess farm produce.