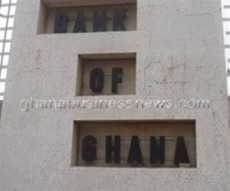 The Bank of Ghana (BoG) says the low key launch of the new 100 and 200 Ghana Cedi note was done to outwit those who engage in counterfeit activities.

This was stated by a Currency Processing Engineer at the Bank of Ghana, George Ofori at a Day’s Sensitization Programme on the new Banknotes for officials of Bank and other Financial Institutions in the Bono Regional Capital, Sunyani.

Mr Ofori said too much publicity on new notes before their launch, gives counterfeiters the opportunity to print fake ones before genuine notes are released.

The BOG is consequently organizing Sensitization Programmes nationwide to help various Stakeholders, particularly staff of Banks and non-Bank Financial Institutions to become conversant with the Security Features on the new notes.

This is crucial since high banknotes are of particular interest to counterfeiters, while it will take a little longer for Money Counting and other Machines to be calibrated to recognize the new notes.

The Public Recognizable, the Machine-readable and the Central Bank Security Features.

He added that the launch of the New-notes took even some staff of the BOG by surprise due to the desire to get Stakeholders conversant with the new notes before the Counterfeiters strike.

Mr. Ofori advised the public not to use just one feature to authenticate the notes but use other features.

Some of them include; Micro Lettering reading Ghana 2 Cedi on the two Cedi coin and lines dubbed the Cornerstone which helps keep the edges of the notes straight.

Mr. Ofori stressed that Bank tellers are the second line of defense against Counterfeit notes, hence the need for them to be abreast of the security features to save their employers from having to pay penalties for sending counterfeit notes to the BOG.

The new notes have been issued to reduce transaction costs and cost of printing new notes as well as ease management of cash.