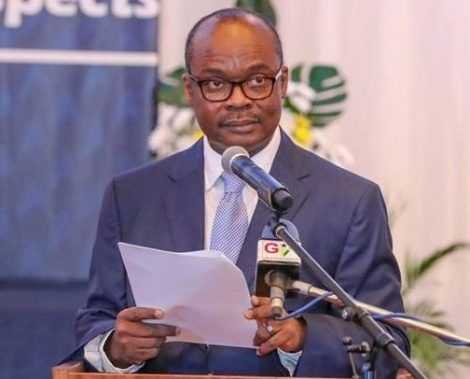 THE BANK of Ghana (BoG) has once again maintained its policy rate at 16 per cent.

This is the fifth consecutive time the central bank has maintained the monetary policy rate at 16 per cent.

The Governor of BoG, Dr. Ernest Addison, made the announcement to journalists on Friday, January 31, 2020 in Accra.

Giving reasons for maintaining policy rate, he said fiscal policy had been a source of considerable stimulus.

He noted that the 2019 budget execution was broadly in line with expectations, with the budget deficit outturn almost on target and within the fiscal rule of 5.0 per cent of GDP.

“While acknowledging that there are electoral cycle fiscal risks, strong commitment by the fiscal authorities to stay on the consolidation path should help sustain the stability and growth achieved over the past three years,” he said.

Over all, according to him, the economy presents fairly resilient and robust performance with regard to output growth and a strong trade and payments position.

The economy is positioned firmly on the path of stability, with inflation forecast to stay within the medium-term target band of 8±2 per cent, barring any unanticipated shocks.

Under these circumstances, the Monetary Policy Committee of BoG at its meeting earlier last week, viewed risks to the inflation and growth outlook as broadly balanced and, therefore, decided to keep the Monetary Policy Rate unchanged at 16.0 per cent, while standing ready to take decisive policy actions when necessary to ensure that inflation remains within the target band.

The policy rate is the rate at which the central bank lends to commercial banks.

Maintaining it at 16 per cent, representing 100 basis points in January 2019, came about after it was reduced by 200 basis points in March 2018 from 20 per cent to 18 per cent, with the bank saying at the time that the immediate risks to the disinflation path were well contained and the conditions then providing scope to translate some of the gains in the macro stability to the economy.