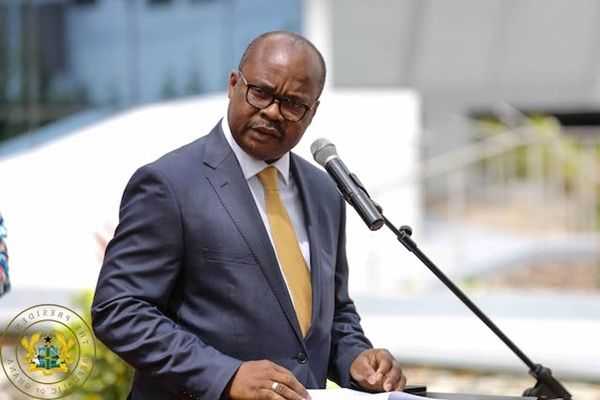 The Governor of the Bank of Ghana (BoG), Dr. Ernest Addison, has said the Receiver of the collapsed banks has settled all payments due depositors.

The governor said 95 per cent of the customers of savings and loans companies, microfinance institutions and finance houses had also been paid their deposits and investments.

Dr. Addison, briefing the President, Nana Addo Dankwa Akufo-Addo, at the BoG yesterday on a number of issues in the financial sector, especially the banking crisis, said there was just about five per cent of depositors of the non-bank financial institutions which had large amounts of money to be settled that were swapped with bonds which were to be retired over five years.

The governor added that the government had provided a bond worth GH¢1.7 billion, out of which GH¢700 million had been monetised, with which the Receiver was also working at clearing the last people that were left in this segment.

Dr. Addison gave the breakdown when President Akufo-Addo asked the governor to tell Ghanaians about the causes and effects of the banking sector clean-up and the state of payment to customers and depositors who had accounts with the banks.

The President, who is the third President, after Dr. Kwame Nkrumah and J. J. Rawlings, to visit the BoG, paid a working visit to the central bank to commend the staff for their work and also salute them for the role they had played in managing the economy.

He later visited the Ghana Stock Exchange (GSE), the first President to have done so, to interact with its management and staff.

Explaining to the President what the BoG had done to avert a repetition of the crisis, Dr. Addison referred to the passing of the new Corporate Governance Directive, which was at the heart of the crisis.


He said because there was a lot of falsification of data submitted to the central bank by the financial institutions, the bank had brought in a new technology which would allow it to get the data directly from the sources to avoid human intervention in data retrieval.

He said because many of the banks reported that they had capital when, in fact, they did not, the BoG had reviewed the entire capital verification process of banks, saying it was currently almost impossible to have a bank that did not have any capital to feign it.

Dr. Addison said the staff of the Banking Supervision Department of the BoG had received a lot of training with the International Monetary Fund (IMF) and some other technical assistant providers.

He said the clean-up had culminated in a stable financial sector with fewer banks and specialised deposit-taking institutions (SDIs) which were well capitalised, liquid, solvent and better able to support the nation’s economic growth agenda.

Those were the efforts that helped the BoG to earn international recognition as the Central Bank of the Year in 2019, he added.

Responding to the governor, President Akufo-Addo said the government found it necessary to give the maximum support for the clean-up exercise because the fragility in the financial sector that his administration inherited was terrible.

He said many of the people responsible for the crisis had found it convenient to point accusing fingers at those who were trying to clean up the mess.

He said the matter had been handled very well, which had made the country come out of the financial sector crisis stronger.

The President described the feat as a major achievement for the governor and his team, stating that it was one of the “reasons I wanted very much to come here”.

He said, however, that measures in place to forestall the recurrence of the banking crisis were not clear to many, saying too many people wanted to know, for instance, what particular specific measures had been taken within the BoG to prevent similar crises in the future.

“I don’t think there is sufficient publicity. And I think with an occasion such as this, it is an opportunity to tell the Ghanaian people the measures that have been put in place to make sure that these events don’t recur, especially the banks’ own institutional mechanism to ensure that they don’t reoccur,” the President advised.

He urged the BoG and the GSE to position themselves well to help the nation achieve its vision of becoming the financial hub of Africa.

He said as the host of the African Continental Free Trade Area (AfCFTA) Secretariat, Ghana must provide the needed leadership for the rest of the economies on the continent to harness their collective efforts to ensure the success of free trade.

President Akufo-Addo said the AfCFTA had great positive impacts and enormous possibilities for the future welfare of the African people, and that the host country for the secretariat would have to be seen to be offering the needed leadership on the continent.

That, he explained, must come in the way in which the economies were properly managed and developed and the measures that would also allow the ideas of the free trade to succeed because the BoG would have to play a critical role in that compelling future.

To the stock exchange, which has listings from a couple of West African countries, President Akufo-Addo expressed the belief that Ghana would now serve as the headquarters of the AfCFTA and the centre of attraction for trade, in which the GSE would have a major facilitating and developmental role to play.

“Your role in all of that is going to be critical. So the dimensions of the exchange and what is feasible on its part are growing larger and larger. It should have a Pan-African and continental camera to work and think,” he charged the two institutions.

"I think a strong and robust stock exchange is usually a very good mirror and reflection of a strong market economy," President Akufo-Addo said, and commended the management of the GSE for its work, saying that "whatever can be done to strengthen an exchange is inevitably tied up to what you can do to strengthen your economy".

He said it was important for those who made decisions affecting the economy to have a clearer idea of what was going on at the GSE, and that was the main reason he had visited the place to find out the impact of the COVID-19 pandemic on its activities.

The President said it was also to ascertain where the GSE was in terms of growing and what the government, for its part, could do to assist in the process of getting Ghana a really strong stock market.

He commended the GSE for its performance, which made it obtain high ratings on several occasions as the best performing and most innovative stock exchange in Africa, noting that those were the solid credentials on which the GSE could build.

The Managing Director of the GSE, Mr. Ekow Afedzie, said the COVID-19 pandemic did not impact so much on the performance of the exchange.

He told the President that the market had done very well, with some GH¢59 billion worth of bonds traded on it by the end of July this year.

He said the GSE was putting in place measures to leverage the memorandum of understanding (MoU) it had signed with the London Stock Exchange as an emerging market in Africa and across the world.

Mr. Afedzie asked the government to consider providing the exchange with incentives and policies to enable it to attract companies to the capital market.