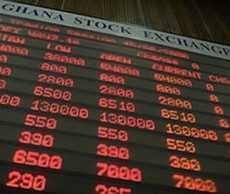 The Ghana Stock Exchange (GSE) has recorded a profit after tax of GHó4.18 million compared to the GHó1.04 million it made in 2013.

This, however, included profit from the sale of a subsidiary, which amounted to GHó1.98 million.

The Chairman of the Board of Directors of GSE, Dr Sam Mensah, announced this at the Annual General Meeting and the launch of the exchangeÆs silver jubilee anniversary in Accra.

According to Dr Mensah, the GSE Composite Index, which measures the performance of the entire market, made a marginal gain of 5.4 per cent compared to the 78.8 per cent recorded in 2013.

The GSE volume of shares traded for 2014 stood at 207 million shares valued at GHó346 million, compared to the volume and value of 313 million shares with a value of GHó456 million recorded in 2013.

The market capitalisation for all listed securities at the end of December 2014 was GHó64.4 billion compared to GHó61.2 billion for 2013, an increase of 5.2 per cent.

With regard to the domestic market capitalisation, the GSE recorded 18.6 per cent increase at GHó13.9 billion compared to GHó11.7 billion recorded at the end of December 2013.

Dr Mensah said in spite of the gains, the harsh economic conditions, which included erratic power supply, decline in prices of main export products and the depreciation of the cedi against the major currencies, impacted negatively on the operations of the exchange.

ōThe negative impact of the energy crisis and the fall in the cedi had an adverse effect on the 2014 performance of listed companies resulting in supply outstripping demand on the market,ö he said.

On what could be done to enhance the capital market, Dr Mensah said the capital market service, including the purchase and sale of shares, should not attract tax under the newly introduced value added tax (VAT) on non-core financial services.