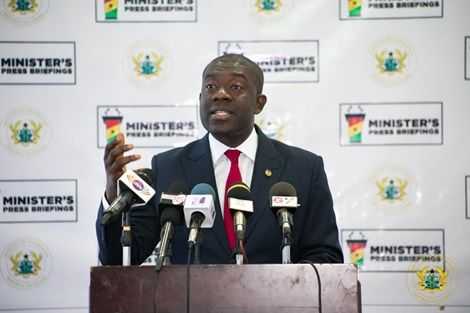 The ruling New Patriotic Party’s (NPP’s) 2016 manifesto promise to construct 10 coastal fishing harbours and landing sites will soon see the light of the day as the Information Minister, Hon. Kojo Oppong Nkrumah in his biweekly media briefing has revealed the construction is awaiting Parliamentary approval.

According to the Information Minister, Cabinet has approved the commercial and financial agreement for these projects, adding that a recommendation has been made to Parliament for consideration and approval in order to commence the construction.

He mentioned that a total amount of 235 million dollars has been earmarked for these projects situated in the 10 selected coastal areas.

The government’s vision, according to the Information Minister is to transform Ghana’s fishing industry as clearly stated in the NPP’s 2016 manifesto, under Agriculture and Rural Development.

“. . Top on the agenda for fisheries will be the programme of building landing sites and storage facilities,” the Information Minister quoted from the NPP's 2016 manifesto.

Touching on the benefit of the projects, the Ofoase-Ayirebi lawmaker said “the development of the fish landing sites and ports is aimed at ensuring safe guard launching and landing of particularly, artisanal fishing and canoes”.

“It is also aimed at creating and maintaining a hygienic environment for the processing and handling of fish. Preventing and minimising post harvest losses and adding value to the fish caught by artisanal fishermen,” he stressed.

The ten identified sites where the landing sites and related facilities will be constructed as mentioned by the Information Minister include Teshie in the Greater Accra Region, Axim and Dixcove in the Western Region, Keta in the Volta Region and Elmina, Winneba, Mumford, Senya-Bereku, Fetteh-Gomah, and Moree, all in the Central Region.

The fisheries sector plays a major role in the Ghanaian national economy. It contributes to 3% of GDP and also has significant indirect contributions to the economy. These include employment opportunities for marine fishermen, boat-yards workers, suppliers of auxiliary goods, services etc and exporting of the fish products to earn foreign exchange for the country.

The Information Minister therefore estimated that upon completion of these projects, the exports volumes and foreign exchange earnings of the country will directly increase more than the estimated 12% increment of total national fish product being exported.