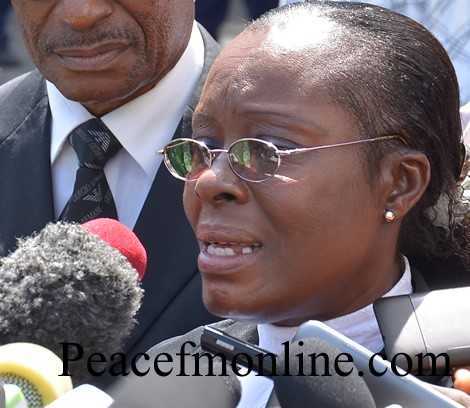 Attorney General and Minister for Justice Gloria Akuffo has said that the punishment for persons caught in laundering money must not end with just imprisonment but the confiscation of their assets.

This, she said, will prevent them from enjoying their booty.

Speaking at a money laundering and recovery of assets forum which is part of the Anti-Corruption and Transparency week, the AG said though processes of tracing the illicit wealth may be difficult, a collaborative effort by all stakeholders will help achieve the desired results.

The forum is a collaborative effort by the EU, Ministry of Justice and Attorney General’s department, Commission for Human Rights and Administrative Justice as well as the Economic and Organized Crime Office.

Delivering her address she said “allowing money laundering to flourish and leaving culprits to benefit from their activities would rather tend to send the wrong signal that crime pays.”

“It is therefore not sufficiently deterrent to only send the culprits of money laundering to jail. No efforts therefore should be spared in denying such culprits the enjoyment of the proceeds of their illegal conducts. This must be the most effective and deterrent way of arresting”, she added.

She stressed: “to deny money launderers the enjoyment of their ill-gotten wealth, assets of persons convicted of economic offenses should be traced, seized and recovered to make the conduct unattractive.”

“The process by which proceeds of  crime are recovered and returned to the country of origin has therefore become a major tool in the global fight against money laundering as well as other financial crimes”.