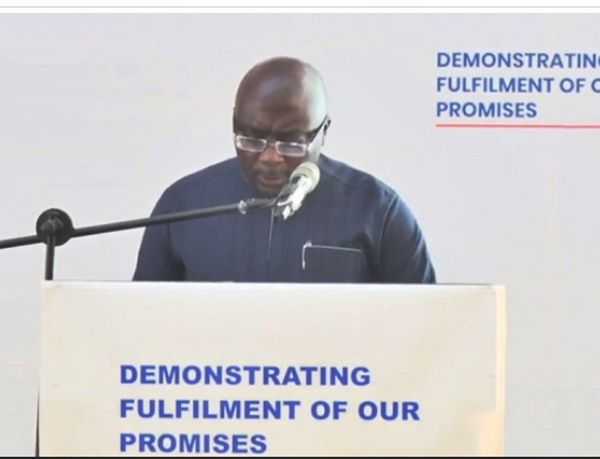 According to him, the President has given the assurance no depositor of a Bank, Savings and Loan or Microfinance Company would lose even a pesewa of their deposits.

Speaking at the Kumasi edition of the Town Hall meeting and Results Fair at the Great Hall of the Kwame Nkrumah University Of Science And Technology (KNUST), he explained that all depositors of these institutions will receive [a 100%] refund of their deposits since this was no fault of their own.

"The government has asked the receiver (working with the Bank of Ghana) to expedite the validation and payment of depositors so that all depositors will receive their monies after validation.

"I will also like to add that this refund will also extend to customers of DKM who have not as yet received the full refund of their deposits. We are therefore cleaning up the mess the NDC created in the financial sector," he added.

Dr Bawumia also accused the erstwhile Mahama government of playing the Ostrich, burying its head in the sand and papering over the cracks, which were noticeable as far back as 2012.

"We (the Akufo-Addo government) inherited a financial system that was weak and fragile with several institutions tht ahd collapsed or were on the verge of collapse. The Bank of Ghana in cleaning up and strengthening the financial sector, revoked the licenses of many banks, savings and loans and microfinance companies. Some have criticized the action the action of the Central Bank for a variety of reasons.

"(But) first of all, let us remember that the failures of financial institutions that have witnessed recently, were a direct result of a system of poor licensing, non-existent capital, weak corporate governance characterized by related party transactions, political influence peddling, cronyism, among other things.

"The NDC government and the previous management of the Bank of Ghana had ample time to address impending failures. They were aware of the problems in 2015 in the case of banks and as far back as 2012 in the case of savings and loans and microfinance companies. Even in opposition, I alerted the country that on the basis of available data, 8 banks were likely to collapse but they refused to act," the Vice President Bawumia recalled.

The most recent has to do with the Securities and Exchange Commission (SEC) revoking the licenses of some 53 Fund Management Companies.

The fund management companies who have lost their licenses were said to be managing a customer base of about 56,000 whose funds run in excess of GH¢8 billion out of the total GHc25 billion of the entire securities sector.

SEC also explained that the revocation is “in accordance with its mandate of protecting investors and the integrity of the capital market.”

A Deputy Governor of the Bank of Ghana, Elsie Awadzi had earlier said that the Central Bank’s banking sector clean-up had started to yield positive results.

According to her, the move which led to the collapse of some banks has helped to protect depositors’ funds and instilled confidence in the Ghanaian banking sector.

Currently, some directors of the collapsed financial institutions have been put before the court whilst others are facing trial.

The on-going prosecutions will specifically ensure that all those culpable, as well as the negligent officials of the regulators, will face justice as soon as possible.