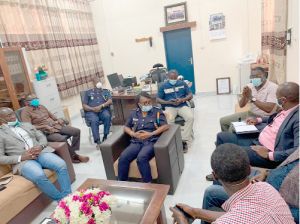 Some 1,116 Bills of Entry (BOEs) have been recorded at the Takoradi Port in six weeks following the introduction of the new clearance platform at the port.
Officials said the new platform — Integrated Customs Management System (ICUMS) which is also known as Unipass — recorded the BOEs between April 1 and May 17, 2020.

Additionally, processing of import declarations has progressed much more than when the system commenced operations, Mr Patrice Napolie Afotey-Anang, a member of the ICUMS Technical Implementation Team, told the Daily Graphic at the Tema Port.

Besides, he said, importers and agents were able to do all activities on one platform as against the past where they entered some documentations on Ghana Community Network (GCNet) platform, and others in the system of West Blue.

A BOE is a declaration by an importer or exporter of the exact nature, quantity and value of goods that have or are being shipped to a particular port.

The Takoradi Port, which handles about 35 per cent of the country’s seaborne traffic, is Ghana’s second biggest port.

“This is encouraging, looking at the initial challenges the system faced,” Mr Afotey-Anang said.

The Takoradi story adds to the progress being recorded at the Tema Port, raising hopes in the functionality of the new system after the initial hiccup.

Mr Afotey-Anang, however, said while they anticipated hitches at the beginning of the implementation of the new platform, the inability of most players to get used to the workings of the system compounded their challenges.

He said most players had issues with using the system because they were not adaptive and were equally sceptical about its functionality.

He said the technical team, in collaboration with the operators, had outlined a continuous engagement programme following the hitches to get the importers and agents to understand the various clearance models of the ICUMS.

Mr Afotey-Anang indicated that since the Tema Port was still operating with the Ghana Customs Management System (GCMS) operated by the GCNet, most officers detailed to work on valuation of declarations which were ordinarily filed through the ICUMS, instead reverted to the use of the GCMS, which they were more conversant with, leaving documentations on importers in Takoradi unattended to.

The Commissioner of Customs, Col Kwadwo Damoah (retd), explained to the Daily Graphic that the system’s inability to automatically select examination officers was something that came to their attention, and “we have raised that, including other pertinent challenges that have been experienced, to the Korean developers, and it has received the needed attention”.

Col Damoah said Customs in the interim was putting in place a team of officers who had a better understanding of the ICUMS to attend to the needs of the importers in Takoradi.

The Vice-Chairman and Secretary of the Takoradi Branch of the Ghana Institute of Freight Forwarders (GIFF), Mr Derrick Agbodjan and Nana Konadu Boakye respectively, also told the Daily Graphic separately that they did not expect the system to be perfect overnight, but emphasised that operators would continue to engage and train importers.