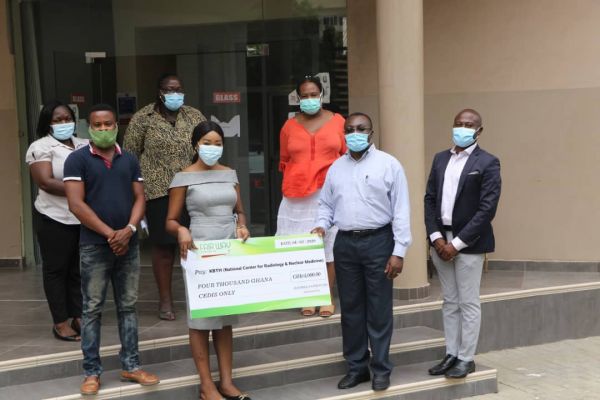 The donation was raised in support of the fight against Cancer during the World Cancer Day earlier in February through the sale of Eco-friendly bags at Fairway Supermarket.

The cheque was received by the Director of the National Radiotherapy, Oncology and Nuclear Medicine Centre Dr. Joel Yarney, who stated that the treatment of Cancer continued to rise in cost both to the patient and the centre. However, he was grateful for the kind gesture and said that such acts of compassion should be emulated.

As part of a month long sales promotion dubbed 'Show Your Support By Purchasing Eco-Friendly Bags' by Fairway Supermarket in Accra, an amount of Ghc 4000 was accumulated from the total profit accrued from the sales of the bags. Yesterday, the amount was donated to the National Radiotherapy, Oncology and Nuclear Medicine Centre at the Korle - Bu Teaching Hospital in support of the fight against Cancer. The donation in the form of a cheque was received with much appreciation from the Director of the National Radiotherapy, Oncology and Nuclear Medicine Centre Dr. Joel Yarney. "We are very grateful to Fairway Supermarket for this kind gesture. Non - communicable diseases with Cancer in particular, are on the rise so we are receiving more patients. And, the treatment of Cancer can be complex and expensive. So this kind act would help in supporting the treatment of patients", he said.

The presentation of the cheque was initially scheduled for March but was delayed due to the Coronavirus crisis. The 'Show Your Support By Purchasing Eco-Friendly Bags' promotion by Fairway Supermarket was carried out through the month of February this year at both branches of the supermarket at Labone and Spintex in Accra.