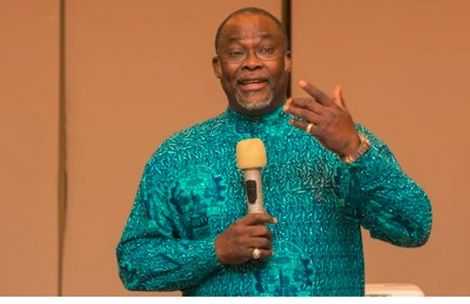 Mr Ekwow Spio-Garbrah, former Minister of Trade and Industry, has called on government, relevant ministries and port stakeholders to urgently address the concerns of freight forwarders and importers on the implementation of the Integrated Customs Management System (ICUMS).

Mr Spio-Garbrah said all stakeholders should be willing to put aside their petty issues and address the issue as it was evident that the new clearing system which took off on June 1, 2020, was not working.

He made the call on Friday when a team of officers of the National Democratic Congress (NDC) had a forum with the various associations of the freight forwarders and importers and exporters on the many challenges facing the implementation of the ICUM popularly known as UNIPASS.

He was at the port with Mr Sammy Gyamfi, National Communication Officer of the NDC, Mr Isaac Adongo, Member of Trade, Industry and Tourism Committee of Parliament and Mr Napoleon Kpo, a former unionist and member of the NDC’s manifesto team.

He said the international dimension of the issue could cost the country a lot of trade benefits as it could affect "our business ranking by the World Bank and other institutions" adding that investors depended on such rankings to decide on which country to invest in or site their business head offices in.

According to him, as the country hosting the African Continental Free Trade Area (AfCFTA), Ghana must set a good example in its port clearance and trade facilitation by making good use of technology adding that “if our port regime is badly managed then what signal are we sending to the others”.

Mr Sammy Gyamfi, on his part, said “we didn’t come here for NDC and NPP, we are all Ghanaians before being politicians and therefore if there is a problem with the port work, it affects all of us”.

Mr Gyamfi added that political parties were not only meant for elections but also could do advocacy work to ensure that the right thing was done in the country to benefit the citizenry hence their resolve to visit the port for firsthand information to enable them push government to solve the challenges.

He added that such push and advocacy was important, saying it was through such acts that government withdrew the luxury vehicle taxes it imposed on Ghanaians.

Mr Adongo said the challenges of the ICUMS were due to the failure of government to allow the system to work alongside with GCNet and West Blue for a longer period before terminating their contract for the takeover.

According to him, the ICUMS did not have any equipment as it was the plan of government to hand over the GCNet and West Blue systems to work with after the takeover but did not happen because the former operators took their systems away as their contract was prematurely terminated.

Mr Samson Awingobit Asaki, Executive Secretary of the Importers and Exporters Association, and representatives of the Ghana Institute Freight Forwarders, said they were not against the implementation of ICUMS but rather, they wanted a fast and more efficient system of clearing their goods.

He indicated that the challenges of ICUMS had led to the issuance of manual invoice as well as high rent and demurrages as they spent weeks in clearing goods.