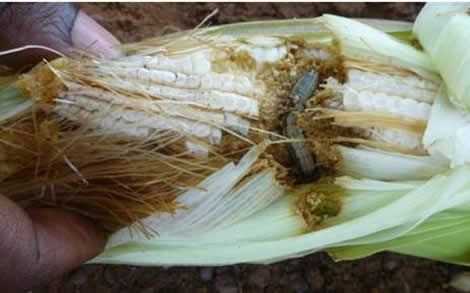 The Centre for Agriculture and Bioscience International (CABI) and the Ministry of Food and Agriculture’s Plant Protection Regulatory Services Directorate (PPRSD) in collaboration with the University of Ghana Soil and Irrigation Research Centre (SIREC) at Kpong are working to find a solution based on biological control for safe and sustainable management of Fall Armyworm (FAW) in Ghana.

The collaborative research effort, which started in 2017, involves the identification and use of biological agents that can help fight the FAW on farms. So far, the partners have settled on two parasitic wasps called Telenomus Remus (Nixon), an egg parasitoid and Coccygidium luteum (Brullé), a larval parasitoid in the over 10 biological control agents identified as potential natural enemies for controlling FAW in Ghana.

Currently, the Telenomus Remus (Nixon), is undergoing field trials at the University of Ghana Soil and Irrigation Research Centre (SIREC) at Kpong to assess its level of efficacy in controlling FAW infestation in maize farms.

To this end, a field day was organized for selected technical experts, MoFA Directors and other relevant stakeholders to see first-hand the progress being made in this important research initiative and to assess the effectiveness of using identified natural enemies to control FAW on maize farms.

Speaking during the field visit, Dr Lakpo Koku Agboyi, Invasives Species Manager at CABI said the FAW situation is getting worse and most farmers were using different kinds of insecticides to control it. He said while the government was trying to promote the use of less hazardous insecticides termed as biorationals to control the infestations, some farmers were still sticking to the use of highly hazardous synthetic insecticides, which affect the environment, human health and also destroy natural enemies of pests.

“We are currently studying some of the agents in the laboratory, one of which we are now trying to promote which is an egg parasitoid,” he said.

Under the study, started since 2017, the researchers work to collect, identify, mass rear and release natural enemies, which can attack the pest, across the country.

Dr Agboyi said the field trials are the first step in efforts to find a sustainable solution to the menace, which has cost the country huge losses.

"The successes here will have to be replicated in other areas and ecological zones and on different soil types to ensure we are there," he said, adding that stakeholder engagement is key.

“We don’t want to develop a technology somewhere and just give it to them and ask them to use it but we want them to understand from the beginning so they can also transfer the technology,” he said.

He advised farmers to avoid the excessive use of chemicals to control the FAW because of its debilitating effects on human health and the environment.

It is in this case that MOFA is promoting biorationals among which are biopesticides which are less harmful to natural enemies and human health compared to the highly hazardous synthetic chemicals. Also, insecticides should be applied only in the situation of high infestation on the farm.

Dr Victor Clottey, West Africa Regional Representative for CABI, said there was the need to provide options to farmers for integrated pest management.

"In late 2017 we went around scouting maize farms in the country picking the eggs and the larvae of the FAW to study in the lab and to see what comes out of them. The simple reason is that we know that for every organism in the world, others depend on them," he said.

He said the initiative is a first step in developing an integrated pest management approach where there is not only dependence on the pesticide but also the use of good farm management practices and other means to kill or subdue the insect to a level where its negative economic impact will not be felt.

Mr Godswill Glante, the Lower Manya Agriculture Director, praised the collaborative effort among the various institutions that are carrying out the research, the University of Ghana, PPRSD and CABI.

“When you look at the FAW situation, we have been using the chemicals to control it for some time now and the farmers are complaining that some of them are becoming ineffective,” he said.

“This collaborative effort in which biological agents are being introduced to control the FAW is good and would go a long way to reduce the menace,” he added.

Mr Aboagye, the Deputy Director of PPRSD, said to manage the FAW since the outbreak, in 2017, a taskforce set up by government strategized every year to put interventions in place, which had worked very well for the country.

“First, we are using synthetic insecticides with harmful effect on the environment and consumers in Accra, who eat the fresh maize.

We have to shift to the use of biological control agents as well as biorational insecticides that do not harm the environment and the parasitoids while reducing the excessive use of insecticides. “We are trying it first on test plots to know the effect and if successful we will start using them on farms next year,” he added.

Dr Ken Okwae Fening of UG SIREC has been at the forefront of the fight against the FAW.

"This project is developing a biological control approach and we are using the Telenomus remus wasps which is indigenous to Ghana against the fall armyworm. We did three releases; one was when the maize crops were two weeks old when the infestation of the armyworm started, another at four weeks and the last one when the crops were six weeks old” he said.

Osafo Ameyaw, a Farmer, said the FAW delays the growth of the maize and reduces the yield, adding that while the use of chemicals helps to an extent, the introduction of the biological agents would be more helpful.