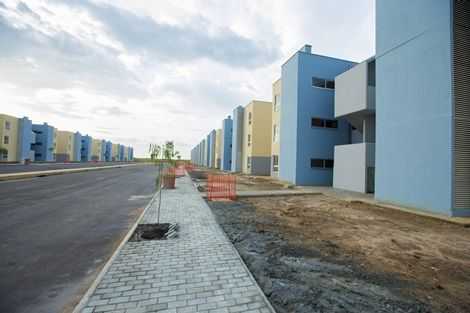 Ghana’s State Housing Company (SHC), says it has made great strides in providing affordable housing for all Ghanaians across the country.

The housing units according to SHC’s Managing Director, Kwabena Ampofo Appiah are to take care of the country’s housing deficit which he said stands at about 2 million.

According to SHC boss, a number of housing projects have been undertaken with the aim of reducing to it’s barest minimum the existing deficit.

Mr Ampofo Appiah who was speaking in an interview on Adom FM’ Thursday said housing units built by his outfit were more affordable compared to what was offered by private estate developers.

He gave the cost of one bedroom fully furnished apartment as GHS 110,000, which is the minimum in the ranges with GHS 990,000 being the maximum cost of any housing unit built by the SHC.

The houses, he said, vary from a 1 bedroom to a 4 executive bedroom. He urged Ghanaians to patronise the SHC’s housing units as they were priced far lower than those built by private companies.

He disclosed also that buyers had the option of paying for their preferred houses in installments for 25 years, using mortgaged arrangements.