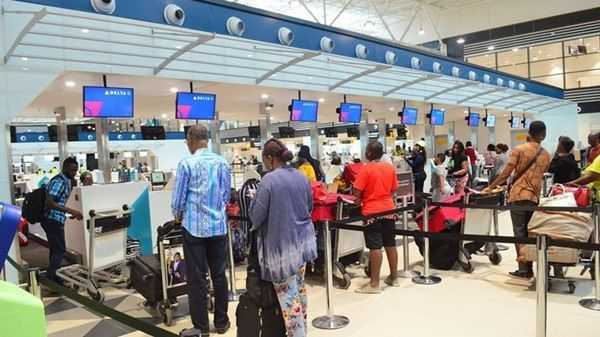 Thirteen international airlines have indicated their readiness to resume scheduled flights to Ghana following the opening of the Kotoka International Airport (KIA), giving hope to the country’s troubled travel and tourism industry.
Although some of the international airlines, including Ethiopian, KLM, BA, Emirates and South African Airlines, flew intermittently into the country when the borders were closed, they were mainly on charter basis.

They have, however, switched and indicated to the airport authorities their intention to resume scheduled commercial flights, many of them starting from last Monday.

Others are Turkish Airlines, Tap Portugal and Middle East Airlines, with regional airlines such as Africa World Airlines (AWA), Asky and Air Cote d'Ivoire assisting with the short haul routes within the sub-region.

However, the flights per week have been scaled down from the predominantly six to 10 days a week flights to an average of four times a week.
Information from the Ghana Airport Company (GACL) showed that about 22 airlines were operating at KIA before the coronavirus disease (COVID-19) broke out in the country on March 12, this year, and the airports were subsequently closed on March 22 as a precautionary measure to curb the spread of the virus.

AWA, which was flying the domestic market when the restrictions there were eased, has also announced scheduled commercial flights to Lagos, Abuja, Freetown, Monrovia and Abidjan from yesterday, doing up to five times a week and three times at the least.

Brussels Airlines, in a statement, said it had started its commercial flights between Accra and Brussels yesterday.

“Based on the market demand and the applicable travel restrictions, the airline has designed a reduced schedule, starting with two flights per week. Via its hub in Brussels, Brussels Airlines passengers have access to the rest of the airline’s network, including connections to London, Brussels, Paris, Geneva, Berlin, Frankfurt, Milan and the United States and Canada,” it said.

However, some of the travel and tour operators, car rental companies and shop operators at the airport have welcomed the news, saying it represents hope for their industry and shows that normal life is in sight.

The Sales Manager of Adansi Travels Limited, Mrs Serwaa Boateng-Gbene, in an interview with the Daily Graphic on Thursday, in Accra, welcomed the resumption of business at KIA, describing it as a boost for stakeholders in the industry.

“Without the borders, especially, the airport, we have no business as travel and tour operators technically, although we can move around internally; but we need more international business to survive and so, resumption of business at the airport is welcome news for us and our business,” she said.

Mrs Boateng-Gbene said no amount of words could describe the negative impact of the pandemic and the closure of the airport to the travel and tour business in the country.

“All our businesses for this year have been cancelled. We had an agreement with a university in the United States of America (USA) to bring students on an exchange programme but it was cancelled due to the pandemic.

“Last year, for instance, we facilitated about 1,000 clients on various holiday destinations but with almost three months to end of 2020 we have done only 50 clients so far and this is against a target of 1,500 clients this year,” she added.

The Business Development Manager of Krishna Travels, Mr Courage Tsegah, said the resumption of scheduled flights presented some form of normalcy to the travel and tour business.

“Considering the fact that we were out of business for six months, from March to August, this development is good news to us and it means we need to go back to work.”

While business has been relatively slow since the opening of the airport on September 1, he said the travel and tour industry was hopeful for an increase in business between October and November.

“We are hopeful that from October, business will begin to increase gradually to November. Since the general election is scheduled for December, we are not considering it because most of our clients won’t like to travel at that period,” he said.

He added that mandatory tests at the airport for all passengers would increase the cost of travelling and, therefore, it served as a disincentive to the travel business.

When the Daily Graphic team visited the airport last Thursday, it observed that there was a gradual improvement in daily activities at the Terminal Three as flight frequencies had increased compared to the reopening date (September 1).

The seven airlines also departed with about 384 passengers on the same day.

Although flight frequencies have improved compared to the reopening date, most shops at the arrival lounge were still closed for business, with the exception of the financial service centre where almost all the financial institutions were in active operation.

Only five out of the 12 shops, including restaurants, pharmacies, digital shops, hotel outlets and lounge at the arrival hall, were opened for business during the time of visit.

Some drivers of car rental companies, such as Lets Drive, Mini Cab and KIA Cargo, had positioned themselves at the arrival lounge to attract clients.

An attendant at one of the hotels, Mr Jonathan Fares, said management of the hotel was putting measures in place to refurbish its outlets before it reopened for business in the coming days.

“Although our outlet, which also serves as an executive lounge is closed, we are currently putting measures in place to refurbish it since it’s been closed for six months,” he added.

A Driver at the Lets Drive Car Rental, Mr Daniel Opoku, stated that he had started recording a gradual surge in his business after the second week of reopening of the airport, though it was not the same as it was before the closure.

He said he was optimistic that business would pick up with a boom in passenger numbers.

A waitress of a restaurant at the arrival lounge, Ms Kukua Baiden, also said patronage at the restaurant was low, in spite of the rising flights frequency.

The KiA reopened to commercial flights on September 1, this year, five months after it closed its gates to the world as part of the restrictions on movement to contain the spread of the coronavirus disease (COVID-19) pandemic in the country.

Chartered flights, including KLM, Tap Portugal and Titan Airways from London, Amsterdam and Lisbon, started arriving from 2:15 p.m. on the reopening day.

Unlike previous arrangements, all passengers are now required to take mandatory tests at the airport after arriving in the country.

All arriving and departing passengers are also enjoined to observe the COVID-19 safety protocols, including social distancing and wearing of nose masks.