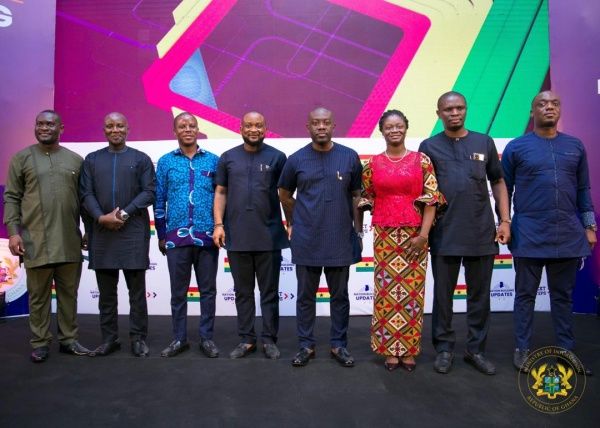 Heads of the various government youth agencies and programmes under the Akufo-Addo administration have been touting achievements under their respective units particularly the support of more than 2.5million Ghanaian youth.

They have praised President Akufo-Addo’s commitment in the empowerment and growth of the youth.

Addressing the maiden edition of the Nation Building Updates in Accra on Tuesday 22nd September 2020 on the theme “Leadership that delivers for the Youth”, the six Chief Executive Officers (CEOs) from the National Youth Authority (NYA), Youth Employment Agency (YEA), Nation Builders Corps (NABCO), National Board for Small Scale Industries (NBSSI), National Service Scheme (NSS) and the National Entrepreneurship and Innovation Plan (NEIP) said the Akufo-Addo administration has made unprecedented strides by providing opportunities and hope for the Ghanaian youth.

The CEO of NABCO, Dr. Ibrahim Anyars, emphasized that government recognizes the challenging burden of unemployment at various levels of society and has adequately initiated measures through the NABCO programme to address it. He said after a successful implementation of the program, the NABCO is beginning transition to permanent employment as the scheme approaches its second anniversary.

“This initiative is to assist address graduate unemployment through a work and learning programme by placing them into work to gain experience, value addition through training and human capital development so the trainees would be ready for opportunities of permanent employment and become innovative in establishing their enterprises. And an exit scheme for additional exposure for trainees to enter into the real world of exploring opportunities,” he added.

Touching on government interventions through her outfit, the Executive Director of the NBSSI, Mrs. Kosi Afua Yankey-Ayeh said government has provided support to the youth in diverse ways. One of such ways she noted is the disbursement of funds through the Coronavirus Alleviation Programme (CAP) Business Support Scheme, an initiative meant to deal with the social and economic impact of the COVID-19 on Micro, Small and Medium Enterprises (MSMEs) predominantly owned by the youth. She explained that through key government interventions, the NBSSI has been able to substantially reduce the high unemployment rate in the country as well as maximize the contribution of small businesses to the country’s economic and social development.

The Chief Executive Officer of the YEA, Lawyer Justin Kodua Frimpong detailed numerous interventions and policy initiatives introduced by his administration which has created close to 145000 over the last 3 years. These include the YEA Jobcentre which connects Job seekers to Employers, the Artisan Directory, Youth in Elite Sports, School Support Program, and Flagship Program among many others. The CEO did not leave out the transformation agenda which has also seen the renovation of the Agency's offices and the construction of new regional offices especially for the newly created regions. He also disclosed the YEA has been saved of over GH₵ 82 million since the coming on of a new administration from the year 2017. This is borne out of prudent management and the institution of an effective validation, verification, monitoring, and evaluation practices implemented by the Agency's management.

Speaking on the numerous government interventions through his unit, CEO of the National Entrepreneurship and Innovation Plan (NEIP), Lawyer John Kumah pointed out government has supported 9,350 businesses financially to make them competitive and viable. He also mentioned that government is embarking on a number of projects including the training of 10,000 students under the student entrepreneurship initiative and supporting 30 innovative entrepreneurs under the presidential pitch programme.


Highlighting the various youth-centered programmes government has embarked on through the NYA, CEO of the progarmme, Mr. Sylvester Mensah Tetteh said government has trained 3,000 young people in online digital marketing and entrepreneurship programme and a further 5,000 young people trained and given adequate skill development in youth entrepreneurship.

The NSS boss, Mr. Mustapha Ussif noted that his organization in the past years has been able to mobilize and deploy Ghanaian citizens who are 18 years and above for national development. He said the NSS in the current administration has become efficient and proactive undertaking projects to combat hunger, illiteracy, diseases, and unemployment in the country.

The Nation Building Updates is a weekly event designed by government through the Ministry of Information to provide stakeholders in Ghana's democracy with detailed updates on key interventions executed by Government.