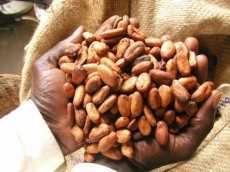 Mr Peter Osei Amoako, Director of Finance of COCOBOD, said the contract for the procurement of fertilizer for the 2016/17 crop season was terminated by Board.

He said available reports show that 2016/17 contract between COCOBOD and Agricult Ghana Limited was terminated because the product tested at Cocoa Research Institute of Ghana was powder however the product procured was lithovit liquid fertilizer.

The Sixth Prosecution Witness in his further evidence in chief told an Accra High Court hearing the trial of Dr Stephen Opuni, former CEO of COCOBOD and two others, that the product did not go through the two year minimum testing regime, although the product tested was on seedlings, the product procured was applied on mature cocoa trees.

He said after that an inspection was carried out and Payments were made in 4 tranches.

He said the first payment was made on July 21, 2015 with a letter of instruction to Ecobank for the transfer of GH¢39,032,118 to Stanbic Bank account of Agricult Ghana Limited.

The second payment was made on August 6, 2015 with a letter of instruction to National Investment Bank, GH¢7,169,113 to Agricult’s Stanbic Bank account.

He said the third payment was made on September 17, 2015 with a letter of instruction addressed to Barclays Bank to transfer GH¢2,000,000 to Agricult’s Stanbic Bank account.

The witness said the fourth payment was made on October 9, 2015 with a letter of instruction addressed to GCB Bank for the transfer of GH¢25,275,223 to Agricult’s Stanbic Bank account.

Asked, how the 2015/16 fertilizer purchases were made, the witness said after all the procurement processes had been completed and a contract signed, the supplier delivered 1 million litres of Lithovit liquid fertilizer.

He said the inspection was done and approval granted and payment was made in seven tranches at a value of $26,500,000.

“The third payment was made on March 18, 2016 from UT Bank to Agricult’s Stanbic account of GH¢4million,” he said.

Mr Amoako said the sixth and the seventh payments were made on the same day of March 18, 2016 with the sixth made Agricultural Development Bank to Agricult’s Stanbic account of GH¢5.5million, while the seventh payment was from Barclays Bank to Agricult’s Stanbic account of GH¢27,435,974.50
“All payments were made in equivalence of Ghana cedis,” he said.

The Prosecution asked the witness, “who authorized all these payments?” And the witness said it was Dr Opuni.

In a cross examination by Mr Samuel Codjoe, Counsel for Dr Opuni, he asked the witness how long he had worked with the Finance Department of COCOBOD and the witness said he had been there for the past 16 years, 3 months.

Asked how long he had worked in the Finance Department of the Cocoa Marketing Company (CMC) and the witness said a year and four months.

“I am therefore right to state that at the time the transactions between 2013/14 and 2016 took place, you were not at the corporate finance,” he asked and the witness answered in the affirmative.

He said because the witness was not there, all his evidence in court for the past three sessions were based on institutional memory but the witness disagreed.

The witness explained that “I was transferred back to Corporate Head Office in January 2017 and during that period I have custody over COCOBOD Finance documents so my evidence is based on available documents in my possession.”

Mr Cudjoe asked the witness whether he had personal information by way of being an official, who worked on the transactions and the witness answered in the affirmative.

He said as a Finance person, COCOBOD records were there for everybody to review and the fact that I was not part of the transaction did not change the records available.

The Counsel showed an exhibit to the witness, indicating that the names of the persons, who after approval, authorized payments and the witness agreed, saying in COCOBOD, two signatories were responsible for signing cheques and letter of instructions for the payments and online payments, if need be.

The instructions emanated from the Chief Executive Officer and his three deputies and that the four of them were on the A side of the mandate.

He said the Director of Finance (DOF), his or Deputy and the Accounts Manager were on the B side of the mandate.

He said the mandate is A and B for signing of cheques and transfers so any of the Chief Executive Officer and his deputies, was eligible to sign on the A side.

The DOF, his Deputy and Accounts Manager were on the B side so any of them was also eligible to sign on the B side, however, generally the Deputy Chief Executive Officer in Charge of Finance and Administration and the DOF signed most of the contract instructions after approval by the CEO.

The Counsel asked the witness that which official authorized payment for the Agricult fertilizers in 2016 and the witness said the payments were authorized by the Deputy CEO in Charge of Finance and Administration and the DOF but the authorization was derived from the approval of the CEO.

Dr Opuni and Mr Agongo are facing 27 charges, including defrauding by false pretences, wilfully causing financial loss to the state, money laundering, corruption by public officer and contravention of the Public Procurement Act.

They have both pleaded not guilty to the charges and are on a GH¢300,000.00 self-recognisance bail each.