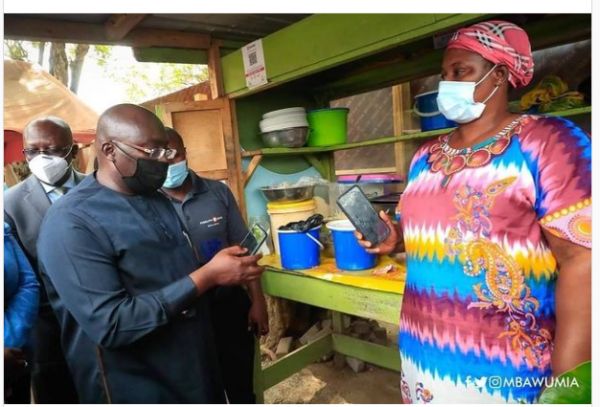 The Vice President of the Republic of Ghana, Alhaji Dr Mahamudu Bawumia as part of the Akufo-Addo government initiative to transform the economy from cash-based to electronic payment-based economy has outdoored a universal Quick Response (QR) code for bank and non-bank transactions.

In the company of the Minister of Communications, Hon. Ursula Owusu Ekufful who is spearheading the crusade and representatives from some of the 13 banks that are using the universal QR code and GIPSS, the Vice President officially outdoor the QR Code by using it to buy ‘Waakye’ to demonstrate its usage.

“Now, let’s go to the Waakye joint to buy from Auntie Muni to demonstrate how the universal QR Code can be used for the non-banking transaction. We will buy the food without using cash and the money will be transferred instantly into the mobile phone account of the merchant. There are no charges to be paid by both the person using the QR Code and the merchant receiving the cash”, he stated.

Speaking to the press on Thursday morning 19th November 2020, Dr Mahamudu Bawumia described the launch of the universal QR Code as historic day as Ghana will be the first country in Africa to launch QR Code system and third in the world to do universal QR Code after Singapore and India.

He, however, emphasized that Ghana’s universal Quick Response (QR) Code is unique, catering for both bank and non-bank customers; those who use mobile money account and bank account unlike that of Singapore and India that only cater for bank customers.

He reiterated that “Ghana’s universal QR Code is unique and it is the first of its kind in the world and so we have to be rightfully proud as Ghanaians that we are using technology to solve a problem that exists in our society but in doing so, we are really leading the world in this manner”.

He hinted that the universal QR Code was made successful due to the collaborative efforts of the Ministry of Communication, the Bank of Ghana, Ghana Interbank Payment and Settlement System (GIPSS), the banks, Telcos, Fintech.

He explained that the universal QR Code essentially allows merchants and all people who receive payments to receive payment on their mobile phones instantly with simple instructions to follow.

He added that the implementation of the universal QR Code will make it difficult for armed robbery operations to take place in the country as people will not carry cash around.

“In this Covid-19 environment, one of the ways you transmit the virus is by handling things like cash. E-Commerce does not develop if we have a cash-based economy”, he mentioned.