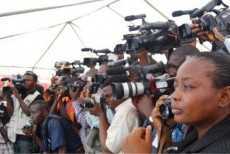 The United Nations (UN) has set aside November 2, every year to draw attention to the need to end impunity against journalists.

According to UN figures, only one in 10 people accused of committing crime against journalists gets prosecuted and convicted.

In Ghana, there is a creeping culture of violence and intimidation against media personnel which poses a threat to national progress.

It comes in the form of threats to and assault of media personnel and the seizure and destruction of their working tools.

The assault has come from traditional authorities, security personnel, government officials, supporters and sympathisers of political parties, among others.

Notable instances of assault of media personnel include the inhabitants of a traditional area in the now Bono Region attacking a radio station for flouting an order by a chief who had sought to censor one of its radio programmes; the police beating up journalists whose only “crime” was that they were seeking information to enrich their stories; military people attacking journalists at the Black Star Square for crossing lines to take photographs; supporters of political parties attacking journalists at press conferences organised by their parties for asking questions which they deemed inappropriate or hostile and attacks on journalists by district assembly staff for pictures aired on television stations which were interpreted by the officials of those assemblies as exposing them or depicting them in a bad light.

The Daily Graphic is recounting these anomalies against media practitioners because attacks on journalists have become a strategy employed by the perpetrators to inhibit journalists from conveying negative news about their activities.

Between 2006 and now, 25 journalists have been attacked by security men alone, and yet none of the culprits have been prosecuted, although, in many of the cases, the journalists and media houses had lodged formal complaints with the police (see story on page 29).

There appears to be little or no action against the perpetrators or a deliberate attempt by the security agencies to shield their members who are guilty of brutality.

The media are a human institution and, therefore, their practitioners could fall short of expectations in the course of their duties a few times.

They could misreport, blow issues out of proportion or even sweep matters under the carpet.

They could sometimes too engage in unprofessional conduct, but that does not warrant attacks on them.

Avenues such as rejoinders, resort to the National Media Commission (NMC) and the courts of law exist for aggrieved individuals or parties to seek redress.

An attack on a journalist is criminal and amounts to an attack on press freedom, liberty and democracy and an extreme form of censorship.

The Daily Graphic is of the view that until perpetrators of such acts are dealt with by the law, the attacks will continue. There must be stiff punishment for people who attack journalists, irrespective of their status in society.

No matter the infractions journalists commit, attacks on them are unjustifiable.

The establishment of media houses by the state itself to disseminate information and educate the public on national issues points to the fact that the government, after independence, did not think that its policies and programmes could succeed if the media were not actively involved or did not play a pivotal role in the process of development.

A thriving responsible media results in development and the success of the media is determined by the cooperation they receive from the public.

While urging the media to stick to the cardinal principles of journalism, it is our view that the laws should be strictly enforced to deter people from engaging in attacks on media personnel.

The security agencies should desist from protecting their members who attack journalists.