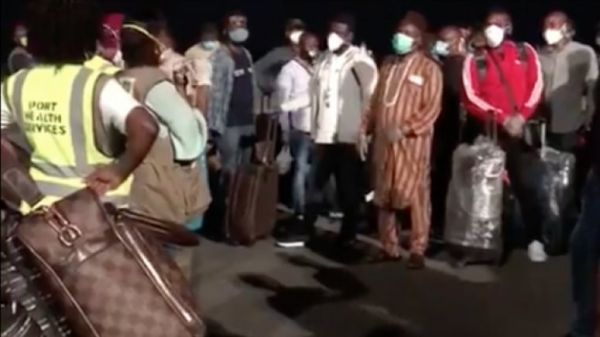 The government on Tuesday announced the evacuation of at least 1,100 Ghanaians stranded in foreign lands back home.

They were stranded in different locations across the world following the closure of borders amid the coronavirus pandemic.

According to the Ministry of Foreign Affairs and Regional Integration, 230 of the stranded Ghanaians were flown in from Kuwait, 77 from Nigeria, 41 being students who were on an exchange programme in Washington D.C in the United States of America (USA), 154 arrived from Dubai while 141 students arrived on a bus from Benin.

The rest were flown in from Egypt, South Africa, Israel, Burkina Faso and China.

Briefing the media in Accra, Shirley Ayorkor Botchwey, the Minister of Foreign Affairs and Regional Integration, said, the stranded Ghanaians were brought into the country between May and early part of this month.

She said about 250 more Ghanaians stranded in the United Arab Emirates (UAE) are also expected in the country soon.

An additional 400 arrived in the country yesterday and later on June 21 from China while 196 are expected from Lebanon.

Furthermore, she said other stranded Ghanaians would be airlifted from China, New York and Washington both in the United States (U.S) by the end of the month.

Whilst we commend the government for facilitating the safe arrival of Ghanaians from abroad into the country, we regret that the processes of evacuating our compatriots from abroad has been impeded by the high cost of hotels to accommodate those who have arrived to undergo mandatory quarantine.

According to Madam Botchwey, the exercise has also been dogged with determining persons considered to be destitute amongst the evacuees.

These issues are likely to present the government additional burden apart from the fight against the disease that is wreaking havoc across the world.

The evacuation of Ghanaians across the world is not an easy task and we believe that there are many others scattered around the world who would wish that they are evacuated back home but help has not reached them yet.

Although the Ghanaian Times is aware arrangements are being made to ensure that all others are brought back home, we believe it is time institutions and individuals which have facilities offer support to the government by giving out their facilities as places for quarantine.

As had been stated above already, the high cost of hotels to accommodate those who have been evacuated to undergo mandatory quarantine has become a burden that government cannot carry alone.

We ask all affected citizens both home and abroad to cooperate with the government as it undertakes the exercise in a manner which will ensure all stranded outside the borders of the country return home safely without exposing the whole populace to COVID-19.