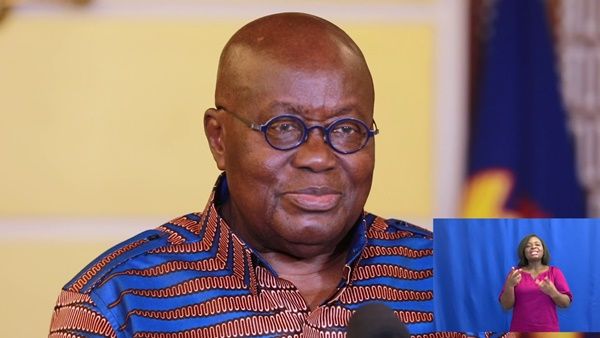 Since Ghana recorded its first coronavirus case on March 12, 2020, the Akufo-Addo-led government in collaboration with the Ministry of Information and the Ghana Health Service, have ensured to update Ghanaians on the pandemic’s rate of infections, recoveries, and deaths.

President Akufo-Addo started a live telecast in an ‘address to the nation’ series about the pandemic, dubbed: ‘Update on measures to contain coronavirus’. The telecast, which has been aired 12 times as of June 22, 2020, has gained the attention of many Ghanaians.

However, there has been a visible trend in how he uses the platform as an avenue for political campaigns towards the 2020 general elections. Here are a number of times the president did not miss the chance to campaign as he addressed the nation.

During his 12th address to the nation yesterday, June 21, 2020, he announced that his government will absorb the examination fees for SHS graduates sitting for the WASSCE exams this year. The cost of the fees for the students is a total sum of GH¢75.4 million. He mentioned that the students are being referred to as ‘Akufo-Addo graduates’.

“These SHS 3 students, also referred to by some as the ‘Akufo-Addo graduates’, are the first group of beneficiaries of government’s Free Senior High School policy to sit the WASSCE exams. 1.2 million Children, the highest such enrolment in our nation’s history, because of this policy, are currently in Senior High Schools,” he said.

Distribution of food to the less privileged

On April 19, 2020, as part of the efforts to mitigate the effects of Coronavirus, President Akufo-Addo provided food for the less privileged.

“Government, through the Ministry of Gender, Children and Social Protection and the Ministry of Food and Agriculture … has provided over 2.5 million cooked food packs to vulnerable persons in the affected districts of Accra and Kumasi. Dry food packs have also been distributed to 470,000 families in the same areas, as against the original target of 400, 000,” he stated in his 7th address to the nation.

This act according to some political experts will increase his popularity within local communities, thereby serving as a major campaign tool for the NPP towards the 2020 general elections.

During his 10th address to the nation on May 31, 2020, Akufo-Addo announced tax reliefs and subsidies on utilities for Ghanaian homes and businesses.

“In view of the obvious economic difficulties that the tough measures brought, I also announced far-reaching reliefs to ease the economic and social burden on households and businesses. These included subsidies on utilities for all, tax reliefs, and financial packages for businesses,” he stated.

The announcement of this relief generated huge conversation on social media, with the many heaping praises on the president. Others also used that as an opportunity to troll former president John Dramani Mahama.

Bringing financial relief to citizens could serve as a campaign tool and increase his chances of retaining his seat.

During Akufo-Addo’s 7th address to the nation, he highlighted the setup of coronavirus treatment centres and the improved conditions in some hospitals across the country. These developments could help in his campaign towards the 2020 general elections.

During his 9th address, president Akufo-Addo stated that his government is working out plans that will revive the economy. With his positioning as a ‘fixer of the economy’, he is likely to win more votes during the elections.

“I chaired a 3-day cabinet retreat to examine in detail measures aimed at reviving and strengthening our economy. I am happy to reiterate that Government is putting in place a Resilience and Recovery Plan, with the overarching aim of finding more resources to strengthen the productive sectors of the economy to ensure sustained economic activity,” he said.


Silent jab to his opponents

During his 9th address, he stressed his resolve to fight the pandemic in spite of the lack of support from other political parties and institutions.

“We are fighting a common enemy, and it is imperative that we do not allow religious, ethnic or political differences to get in the way of certain victory. So, we cannot allow a few persons, who wish to use these differences to scuttle our collective fight, to succeed,” he said.

His statement according to some political experts will decrease the popularity of his opponents, thereby increasing his chances of winning.