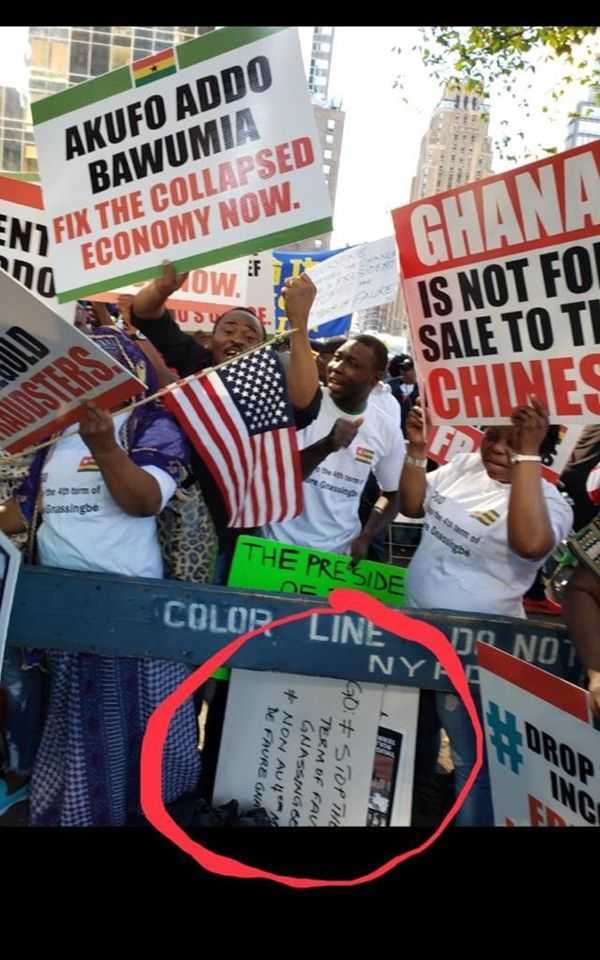 When Ghanaians both home and abroad thought the NDC led by its leader, “The Incompetent One”, H. E. John Dramani Mahama could have purged themselves of incompetence to ready themselves for the 2020 elections, we then woke up to a new height of incompetence, but this time, at international stage and in the full glare of the world at the United Nations General Assembly, New York.

On Wednesday September 25, 2019 the President of Ghana was set to deliver his speech on the floor of the United Nations General Assembly (UNGA) meeting in New York City. As expected, every year, citizens of various countries living in the areas around New York and nearby states come to the UN Park to either show their support or their displeasure to their country’s Presidents and heads of state during when they deliver their respective speeches on the floor of the UNGA.

Pro-government protesters throng to the grounds of the UN park to express their support and approval of the government of President of Ghana H.E. Nana Addo Dankwa Akufo-Addo his policies and achievements with chants, cheers and expression of contentment to the Ghanaian leader throughout the morning and late afternoon.

To their dismay, around 4:30pm a handful of NDC supporters in their quest to embarrass the President of the Republic to the world, holding placards with anti-government inscriptions came to demonstrate. Realizing how woefully embarrassing their numbers were, vis a vis the pro-government supporters, financially induced some Togolese nationals who had also come to the grounds to protest that day, seen clad in their Togolese branded T-shirts holding signs with French inscription, abandoned their protest to join the NDC protest. NDC shamelessly used these Togolese foreign nationals to demonstrate against the President of Ghana, their own country’s President on a foreign soil. This unpatriotic shameful act has never been seen before in the history of Ghana. (As seen in the picture)

NDC with their embarrassing act, succeeded in perfecting their internationalization of incompetence and unpatriotic behavior towards mother Ghana in the full view of the world.

There is one thing demonstrating against the president of your country, which we acknowledge as one’s constitutional right, and another thing painstakingly hiring foreigners to demonstrate against your president in a foreign land. This is an all-time low any individual, group or political party can go to want to embarrass the president of their country. In fact the NDC did go this low and gladly they failed woefully!

The shameful, unorganized NDC members and their Togolese infested group, numbering about 10 left many shocked and in disbelief that they could display such incompetence internationally.

Former President Mahama and his NDC by this dishonest and deceitful act have officially confirmed that they are not in a position to get anything done right, because they swim and live in incompetence on a daily basis and surely cannot help themselves.

The NDC needs to wake up to the realization that nation building and governance are serious undertaking for serious people, and that every aspect of what goes into it must be approached with honesty and with outmost seriousness and competence. They have proven time and again that Ghanaians cannot leave the destiny of Ghana into their incompetent hands. Even when they have to just copy, they still, gladly, copy wrongly.

NPP under the able, competent and visionary leadership of President Nana Addo has taken the world stage by surprise with his prudent management of the country after the country was mismanaged by Mahama who superintendent over gargantuan create, loot and share which led to a near collapse of the economy for which Ghana had to go to the IMF for a bail out.

NDC’s incompetence has no bounds and it is a scary thought that they consider themselves as an alternative to the ruling government of the NPP. We ask the NDC, “How low can you go to internationalize your incompetence”.
To Ghanaians, we say reject the NDC once again!