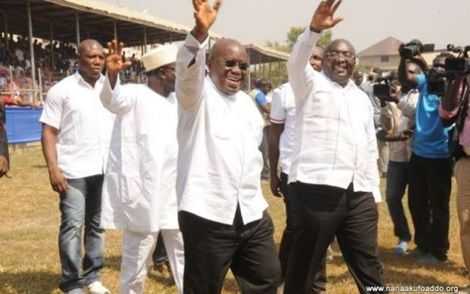 The opposition NDC held a public forum on the 2020 budgetary statement of the Akufo-Addo administration and painted a very gloomy picture of the economy.

They highlighted the rate at which this administration has accumulated debts and made the point that things have gone haywire under the Presidency of Nana Addo Dankwa Akufo-Addo.

Let us use facts and figures to winnow the truth from the fictitious figures they churned out at their forum.

Speaker after speaker at their post-budget rendition sought to create the impression that it is all gloom and doom since the Akufo-Addo/Bawumia administration took charge of the affairs of the economy.

Within the eight years of NDC rule, it had shot up to GHC122 billion. Fifi Fiavi Kwertey, taking his turn to deliver his uninspiring speech at the forum, intimated that in the last three years, the Akufo-Addo administration has increased Ghana's debt stock to GHC206 billion, representing 75% of the existing GHC122 billion bequeathed to the Akufo-Addo government.

The 75% increase he gleefully pontificated cannot be questioned because it is a fact. However, a quick calculation of the debt stock the NDC left, the GHC122 billion as a percentage of the GHC9.3 billion reveals a staggering 1211%.

Clearly, the NDC performed abysmally under the circumstances. The fact has to be made poignantly that the 75% debt accumulation was mainly used to retire old debts and to pay for the seas of projects they undertook they did not pay for.

Let us take a stroll through the years to look at the debt accumulation rates. In 2013, it was 47%. It means that, the Mahama administration borrowed to the tune of 47% of the 2012 debt figure.

In the year 2014, the Mahama government borrowed 49.9% of the existing debt stock. This remains the highest debt accumulation period in our economic history. It was this phenomenon that gave rise to the infamous 'We have chewed all the meat to the bone' comment by the then President, John Dramani Mahama. This also informed the decision to seek the support of the IMF in the form of a bailout in 2015.

Let us come to the Akufo-Addo era and see how much our debts have been leaping year in, year out and juxtapose them with Mahama's record.

In the year 2017, despite the oodles of challenges that the new government faced, our debt accumulation rate was 16% and came down to as low as 11% in 2018.

Simply put, the rate at which this government is borrowing is far lower than that of the NDC.

For the first time in 15 years, in 2017, we recorded positive primary balance, meaning our total debt accumulation was lesser than the total interest payments made in that year, we have recorded a similar figure in the 2018 fiscal year.

These facts and figures trounce those of the NDC regime, therefore, the melancholic and despondent picture they tried to create can only exist in their perverted imaginations.

In all these, what is a fact which cannot be disputed by the NDC is that their incompetence led them to seek solace in the uncomfortable arms of the IMF, leading Ghanaians to swallow bitter pills they had not bargained for.

We were in an economic darkness under Mahama. The Akufo-Addo/Bawumia team has pedalled us out of that marshy area and we would not dream of returning to Egypt.