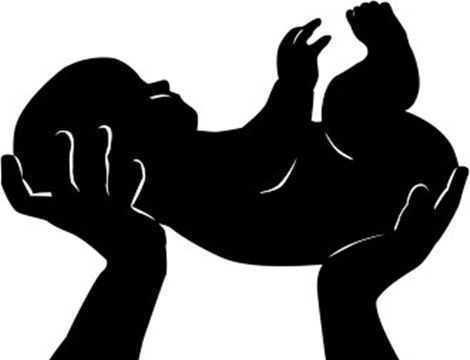 The idea of reincarnation is as old as human beings had the capacity to make sense of their existence. For almost all known cultures, reincarnation is the philosophical basis upon which the conception of life makes some necessary cyclical sense.

With that sort of fundamental belief, Africans, such as the Ga of Ghana, are known to have elaborate rituals concerning the ‘welcoming’ and ‘re-introduction’ of a reincarnated person. When they are as young as two week-old babies, the Ga perform customs and rites, as well as set aside special names for reincarnated persons.

The Ga are the one half of a twin coastal ethnic group in Ghana. The other half is the Adangbe, with whom the Ga share linguistic similarities and origin narratives.

Together, the Ga-Adangbe comprise about half of the population in Ghana’s capital city, Accra.

The Ga people are actually very famous in the West African sub-region for their customs and celebrations of newborns. There is kpojiemo, literally an ‘out-dooring‘; a ceremony at which a child is christened and inducted as a member of the community.

On weekends in modern times, it is possible to spot an out-dooring ceremony accompanied by loud music and merrymaking in almost all of Accra’s community centres.

On the traditional calendar, there is a “twins day”, celebrated as part of the local Homowo (Shaming Hunger) festival.

Such as is the significance of procreation to the Ga people that it dovetails into the people’s conceptualisation of reincarnation.

The Ga call a person who is believed to have reincarnated, gbobalor. The word literally translates into ‘death-comer’, encapsulating quite adequately, who the new baby is thought to be.

For the Ga, a reincarnated person is the soul of one dead human being who has taken to another body. It could be a long lost ancestor or even someone who died the day before the baby was born. Usually, diviners are reputed to have such esoteric tools for identification.

However, the easiest way for people to tell if a baby is a reincarnated person is if the same mother loses a child in infancy, at least, twice.

The child should have died before its first week.

Infant mortality befalling the same mother multiple times is to the people, a signifier that a soul is troubled and requires some special attention. Diviners and spiritualists are therefore called to intercede.

The soul which is either su or kla, is the immaterial constituent of your being. It is also the life-giving capacity which acts as the origin and depository of your temperament, experiences and even character.

Indeed, when the Ga are condemning your character, they are most likely to say osuban be for, which literally translates into “your soul’s shield is ugly”.

The importance of having a soul choose its one body, and hopefully sticking with it, becomes of utmost concern to bereaving families and diviners.

If a woman who has buried her first two infants cares for another newborn for at least, two weeks, the Ga believe that child is here to stay. These days, it is common for nursing mothers and families to wait for a month or two to be certain.

The child who has come to stay is a reason for the people to believe that a wandering soul has found a ‘perfect’ body. Or that the other-world is not upset with the ethereal.

To perpetually make out a reincarnated person, diviners in conjunction with the family of a baby, use a hot knife or a blade to mark a sharp symbol on either or both of the baby’s cheeks.

However, the practice of marking a baby’s face is increasingly becoming a thing of the past thanks to child rights activists and the dynamism of Ga culture’s sense of beauty.

Apart from facial marks, the baby is also denied a festive out-dooring because its coming to be in the world is thought to be solemn and not celebratory.

The significance of withholding celebrations is to make room for reflection on what it has taken for the soul to be considered a person.

Perhaps, the most significant aspect of the Ga reincarnated baby customs is the special names the babies are given.

It has to be noted that the Ga do not have a ready set of names to give a reincarnated person however, mothers are encouraged to choose a name that captures their feelings after going through the ordeal of losing babies.