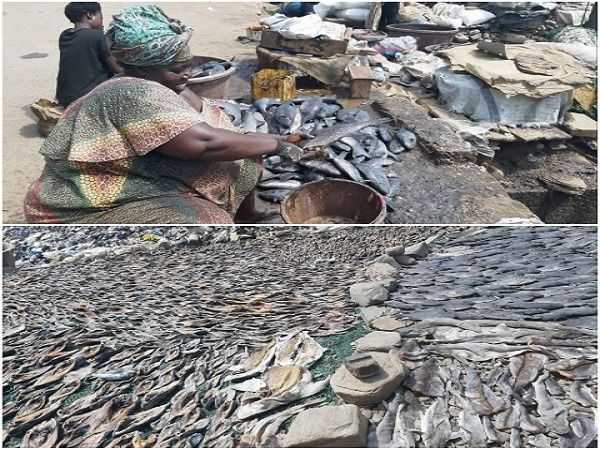 One could be misled by the nose and miss out on a delicious culinary journey in a Ghanaian environment because of the smell of a veritable food ingredient called momoni.

The 'mighty' momoni is Ghana's answer to Swedish surstromming, Korean hongeohoe or and the Japanese Kusaya, although not as putrid as the three foreign fermented fishes.

Momoni, as the Akans, the Ghana's largest ethnic group, call it, is the most used name but the Ga people who are indigenous to Accra, Ghana's biggest and capital city, call it “looshala” while the Ewes, original occupants of the country's southeastern border region, call it "Lafifi" .

The mere mention of it draws laughter from people because very few brave food connoisseurs would publicly identify with it.

No food additive or base was ever denounced in public but loved in private like momoni, a food connoisseur who wants to be anonymous, said.

Oh yes, it is a special ingredient because no authentic Ghanaian eatery (chopbar) would have the best okro stew, palaver sauce (cocoyam leaves with melon seeds stew), garden egg stew among others, without looshala.

The entire neighbourhood would know that you are cooking something special and may ridicule your effort openly but envy your choice of cuisine.

A good momoni has a domineering scent and cannot be hidden no matter how small it is.

It is a fermented salted fish which comes in various textures according to the fish species used.

Some fishes used for the fermentation process are mackerel, barracuda, catfish, threadfin and sea bream.

Under the scorching sun at Awudum, a suburb of Tema Newtown in the Greater Accra Region sat a number of women who are busily doing their usual work of processing momoni.

Maa Fanti, one of the processors had a large quantity of the fish piled on the floor with some in bowls yet to be gutted.

She indicated that the life span of the momoni starts from the acquisition of the dead fish between GHs 4 and GHs 6 from nearby trawlers, canoe fishermen and sometimes from local fishmongers.

The fish then finds itself at the processing place, where its intestines are removed, and rock salt shoved into the empty stomach, and put into a special concrete hold shaped like an oven were a small quantity of seawater is poured on it and covered for four to five days.

She explained that by doing so, the fish will not rot adding that some of the fish do not need the seawater as its own fluids when drained, will help in the fermentation.

Maa Fanti, who has been in the momoni processing business for decades, stated that after the required days in the cave, the fish is brought out and sun. dried in an open space paved with pebbles.

After sun drying for four days, the momoni is ready for the market where consumers could purchase a one-inch cube size for GHs 2.

Observations at the processing centre

The task of these momoni processors look daunting as they sit in the scorching sun without any shelter, virtually sun-drying themselves with the fish.

Maa Fanti just smiled when I enquired about that and she simply said “building a shade will prevent the fish from drying the way we want because the shade will fall on the fish”.

But are these women not exposing themselves to sicknesses due to the sun rays?

To complete the momoni processing, the fishes are dried in lines on the pebbles on the floor, it was observed that even though the stones had been specially arranged. Not far from the drying place, which is closer to the seashore, is a huge refuse dump also used for open defecation.

I have been wondering if a better option cannot be created for the processing and drying of the fish just like the drying racks used in other countries.

Such hygienic methods would surely prevent the contamination of the beloved momoni which would find itself onto the dining tables of even political power brokers.

A number of people in a non-scientific survey on the consumption of momoni, said its taste in food was what makes it so special.

Nana Yaa Kodua, a caterer said, “I cook with momoni a lot because it gives the food a nice taste. I mostly use it for kontomire, garden egg and okro stews”.

Another user, Madam Elikplim Atiaka on her part, said “when it is in a soup or sauce, I consume papa but I hardly buy because my husband prefers kako to the momoni”.

Some respondents however said they do not eat it because of its overpowering scent or due to allergic reaction they get which often lead to the inflammation of their tonsils.

Is momoni safe for eating?

Mr Samuel Atuahena Antwi, Tema Metropolitan Nutritionist said he does not have any reservations against the consumption of momoni but cautions that due to its high salt content, consumers must know how to combine it with other ingredients to minimize the salt content which has serious health implications.

Its odour has caught the attention of some researchers including Anihouvi, Kindossi & Hounhoiugan. 2012, who observed that “a number of practices observed during processing of traditional fermented fish products constitute health hazards to consumers”.

According to them, these practices are related to the processing technique itself, the environment in which the fish is processed, how the fish waste is disposed and the unhygienic nature of the processing material as well as improper way they are packaged.

The fish, they noted, is sometimes held under the feet when dressing indicating that “this practice can lead to microbial contamination of the fresh fish”.

As we dine and feast in the season of Christmas and the New Year, will you consider putting the special momoni into your food or you will just have a sauce without its touch? Whatever your choice is, the fact still remains that momoni is cherished by many Ghanaians who will proudly tell you that it is “b)nd3” to wit, “It stinks but tastes good”.