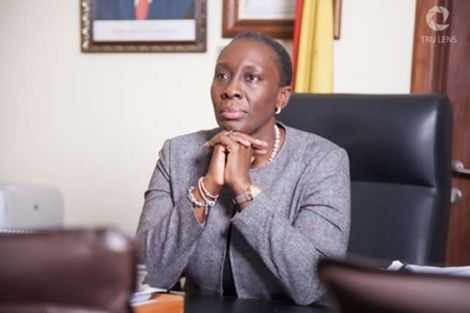 Dear Marietta,
W.B. Yeats, in his classical literary work, "The Second Coming" introduced a phraseology which was popularised by our own Chinua Achebe in a book titled Things Fall Apart, (the Centre Cannot Hold).
Indeed, things are falling apart for the NDC and its candidate, John Dramani Mahama in the wake of this Airbus bribery scandal.

Human nature being what it is, when a boss is plunged into such a depression of a scandal, the tendency for his subordinates to mount a defence against the onslaught going his way is very high.

It would have been unconscionable on your part to stand akimbo while your former employer is being hanged, drawn and quartered due to the bribes Airbus has admitted to have paid to him through his family member.
In your attempt to hive off prying eyes and mute tongues rambling on, you have come to town with a release seeking to disclaim the juicy portion of the admission made by Airbus. This is what your disclaimer states, in part;

"Indeed, the Approved Judgment of the Crown Court of Southwark

approving the DPA between Airbus and the UK Serious Fraud Office does not allege that any payment was made by Airbus to any Ghanaian Government official.

It is therefore a gross distortion for the media to conclude that officials of the Ghana Government between 2009 and 2015 were bribed or paid any commissions by Airbus for the acquisition of the Casa C-295 aircrafts"
In sum, you are insulting our intelligence, creating the impression that we do not grasp or understand the court's ruling.

Madam, the judgment was not written in Latin or Greek. It was neither written in Hebrew nor some alien ancient language whose linguistic systems have eluded us. The judgment was written in English, not French!
Your defence is too porous to withstand critical scrutiny. It sounds too amateurish to ward off the damning effects of this scandal.

If it is your thinking that this is good enough to shut Ghanaians up, kindly go to the UK and file a defence or better still, counter sue Airbus and all those internationally acclaimed newspapers which made this news public.

The irrefutable truth is that your boss is Government Official 1 and it is believed that Intermediary 5 is one of his siblings.

Your defense against this scandal lacks potency. It is obvious that you felt like putting something on paper to let your supporters know that the ominous rumblings of discontent by majority of Ghanaians should not constitute the downfall of John Dramani Mahama.

The pot has cracked, pouring out the water it contained. Nothing can restore such a broken pot and reclaim the water made dirty by the sand. Government Official 1 is scary and scandalous!