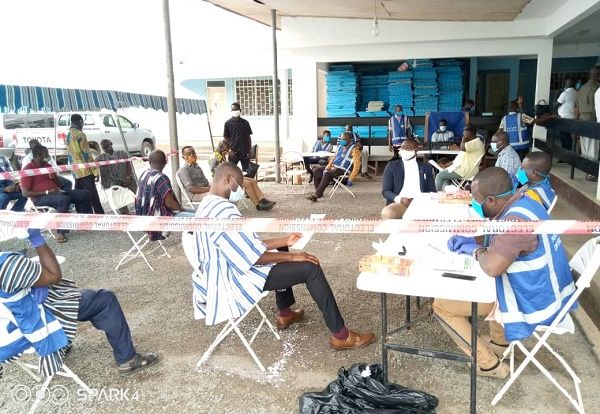 Until my retirement, all previous registrations and voting I have participated in were done at my “home town” Burma Camp. Seeing the long queues and the disorderliness at other places with the current registration, I decided to go back home to Burma Camp to do the “2020 COVID-19 Registration” when the centres open there.

However, in a phone call to me on Saturday 4th July 2020, my Community Vice President told me he had arranged for us the Executive members to be registered at 10am on Sunday, 5th July 2020. Somehow, with this registration on a Sunday and with my Burma Camp mindset, I looked forward to an orderly registration in minutes as I was used to.

I went through the protocols of my forehead being thermometer-gunned for my temperature, washing my hand under Veronica bucket water and applying hand sanitizer. My wife and I and the Secretary of my community and his wife were then led to a classroom where the senior citizens had been put.

After an hour of waiting without anybody telling us anything, I called the EC official and asked him what was happening to us the oldies. He complained to me that, some young men had warned him not to give any preferential treatment to any senior citizen. He further added that, they told him “first come, first serve!”  To say I was shocked is an understatement. Coming from a disciplined culture, I could not believe my ears. Apart from the culture shock of the disorderliness and confusion with angry people shouting all over, I could not believe the EC official would repeat what he had been told to me. I asked if he was happy telling me that.

Two hours later, I called him again. As if acting on a cue, a young man joined us. In a rather aggressive manner, he told me “Old Man, give me your number and go home. You can come back to register tomorrow morning at 6am.”

When I asked if he was an EC official, he replied in the negative. So, I demanded to know who he was. In a manner a lawyer friend described years ago as “mood bellicose” he arrogantly bellowed at me “I am a party agent!” Shakespeare’s quote “discretion is the better part of valour” rang in my ears.

With that, I decided to leave the Centre back home. Sadly, my Community Executive member colleague who has a problem with his leg had to endure this with me and our wives.

My VP lodged a formal complain to the EC and to the Assemblyman on the conduct of the party agent. He sent an unqualified apology to the four of us.

On our arrival before 7am on Monday, 6th July 2020, we went through the same safety protocols. Once again, we were directed to the same classroom where some senior citizens were waiting.

After two hours, none of us had been called. It was obvious we had been conveniently forgotten. However, I observed that, the party agents were ferrying people to be registered not in any order. When I confronted him, the EC official apologised to me. At this stage, I asked him to stop service, and serve all the senior citizens and lactating mothers before attending to young teenagers who obviously looked first time voters.

Five hours later around noon, I got my Voter Identification card.

I asked myself, did I have to go through this as a retiree after over forty-three years dedicated service to my country?

The time wasted aside, I found the disrespect with which the elderly got treated difficult to take. Unfortunately, as a nephew told me once when I complained about their generation’s disrespect and arrogance, our generation taught Ghanaians “positive defiance,” the negative effect of which we are now at the receiving end.

In other jurisdictions where many big Ghanaians now at the helm of affairs have studied, new born babies are given a social security number before they are discharged from the hospital. This is updated as they grow and is what they use for all electoral processes when they attain age eighteen and become eligible to vote.

Over sixty years after independence, what are we still waiting for to join the countries which do it?

My experience for the 2020 Registration has not been pleasant. My generation felt humiliated and disrespected by not only the EC officials but by the youth in general. We need to bring back all the societal values we threw away in revolutionary frenzy.

Without that, instead of goodness and mercy, disrespect and violence shall follow us all the days of our lives forever!