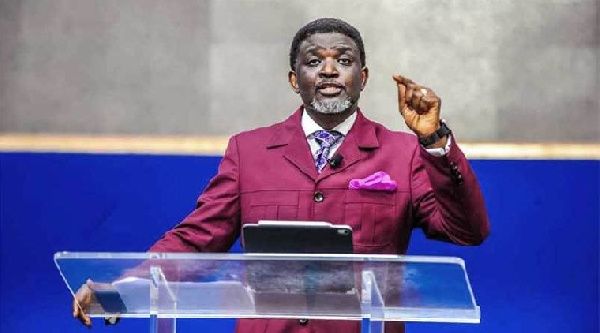 NPP-USA is struck with consternation to hear the comments from Bishop Agyin Asare, the founder and leader of Perez Chapel, on the much-needed financial sector clean up. It is very regrettable that the minister of the Gospel is using the pulpit to make these sweeping statements which are not only unfortunate, but factually inaccurate and deliberately intended to spite the government of President Nana Addo Dankwa Akufo-Addo.

It is also sad that in the Bishop's quest to absolve these financial institutions from blame, he deliberately glossed over the facts which are already available to the public with all discerning minds having read them. The venerable Bishop tried hard to blame government for the inability of some financial institutions to survive the much-needed financial sector cleanup. These assertions are palpable falsehood, factually inaccurate, borne out of malice which are only intended to achieve some sectarian interest. NPP-USA wishes to correct these untruths immediately before they begin to fester.

The Bible says, for where your treasure is, there your heart will be also (Matthew 6:21). It stands to reason that a former board chairman of one of the financial institutions that went under during the cleanup will feel aggrieved and lash out at regulators and the government in the way that Bishop Agyin Asare has done, but his comments are however, unfounded at worst.

As enshrined in the 1992 constitution, Bishop Agyin Asare, like any other citizen, has the right to criticize the government anytime he so wishes but this criticism should be constructive given the level of sophistication of his devotees and his audience. Unfortunately, however, his facts are uninformed and grossly misleading and therefore should not be entertained. The government of Nana Akufo-Addo has the powers to protect the average Ghanaian from the greed of a group of shylocks who operate as directors and executives of these financial institutions whose sole aim is to fleece the innocent citizens with impunity through pervasive corrupt practices which have become a regular feature in the financial sector.

The following are verifiable and incontrovertible facts regarding the banking sector cleanup:

1.       Some banks were saved, including Kofi Amoabeng’s UT Bank which he referenced in his speech, while some were taken over by bigger banks others were consolidated into stronger banks.

2.       Government of Ghana made severance payouts to former bank workers who lost their jobs.

3.       Most financial institutions were insolvent, and liabilities exceeded their assets.

4.       Falsification of initial capital during the application for a banking license (Heritage Bank Limited)

Bishop Agyin Asare, as a board chairman of First Trust Savings and Loans (2014 - 2018), had a primary fiduciary duty in respect of the shareholders; that is, he had financial and other responsibilities to keep the efficient running of the corporation so that the shareholders did not lose their monies. The financial malpractice - loot and share - happened under his watch. Bishop owes an explanation to Ghanaians on measures he put in place to ensure that executive authority was only granted to appropriate persons, and that adequate reporting systems were put in place to enable it to maintain overall control. This is no different from being a good shepherd and making sure your sheep are adequately taken care of.

Bishop Agyin Asare betrayed and dishonored depositors. Having attained such an eminent status in society, this might not be the last time he will have the honor to oversee the affairs of a business entity. Thus, we would like to remind him that being ignorant is not so much of a shame as being unwilling to learn and to speak the truth on crimes perpetrated against the average Ghanaian depositor.

Whilst a certain incompetent and lackadaisical government sat unperturbed and watched their cronies criminally siphon moneys from innocent Ghanaians, the altruistic and empathetic government of the NPP and Nana Akufo Addo swiftly sprang into action to protect the average depositor. Let us be reminded that the continued existence of these financial institutions posed severe threats to the stability of the financial system and the interests of their depositors. The Bretton Wood Institutions, after a stress test conducted before 2016, had called for the financial sector cleanup but the loot-and-share Mahama government failed to do the needful.

The tragedy of Agyin Asare's unfortunate comments: he is not unaware of the undiluted facts, but rather, to have no compassion on the average Ghanaian, the same people who revere him, will send chills down the spine of many Ghanaians. C. S Lewis said, "I believe in Christianity as I believe that the sun has risen: not only because I see it, but because I see everything else". Until we believe that except the least of us is taken care of - - the best of us cannot survive - - we will not take any pragmatic measures to help those who are vulnerable in our society. The NPP government led by Nana Addo had no choice but to take such hard but empathetic decision to help save our entire banking sector from total collapse.

Furthermore, at a time when the world is still facing an unprecedented level of uncertainties due to Covid-19, the least he could have done was to have commended the Nana Akufo Addo’s government on the policies it has put in place on how financial institutions can better cope with the challenges resulting from rising solvency risks. Ghana now boasts of a resilient banking sector and the new banking regime has placed comprehensive corporate governance including adherence to acceptable Anti Money Laundering /Counter-Terrorism Financing (AML/CTF) standards at the forefront of banking practices.

To this end, we need to remind ourselves that The three "C's" of Life - Choices, Chances, and Changes must be the guiding principle in our quest to become a great nation and we cannot but make a choice to take a chance or our lives will never change for our citizens who desire to become the best in their endeavors. We remain informed citizens!