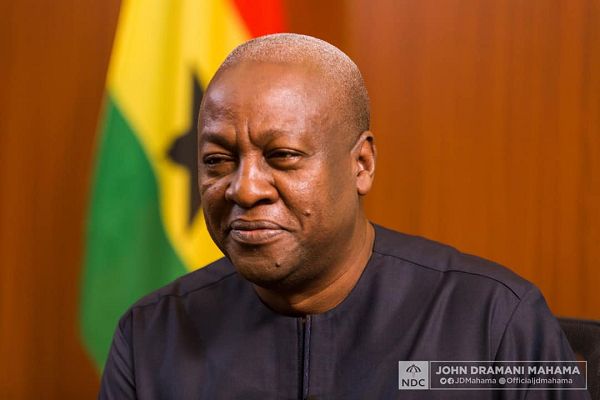 John Mahama was doing well with his speech to announce his running mate until he attempted to compare the NDC to NPP. I was utterly thunderstruck why a person with an international tag of Incompetence will embark on such a Sisyphusian task of Comparing the NDC to NPP.

We in the NPP were sitting our somewhere but since he has invited us, we will humbly answer his call.

I am worried about how John Mahama turned such a serious occasion into a theatre of comedy. I was not expecting much from John Mahama. However, I felt it could have been an opportunity to give Ghanaians his campaign message.

John Mahama's unsuccessful attempt to accuse the NPP of dehumanizing Ghanaians, Stripping Ghanaians of their citizenship and promoting unemployment catapulted his usual jokes to a crescendo. As to how Nana Addo dehumanized and stripped Ghanaians of their citizenships, only God knows. Let me take this opportunity to update the incompetent John Mahama about how Nana Addo is solving the unemployment problem he left behind.

For Mahama to say, he doesn't know that Nana Addo has collapsed the Unemployed Graduates Association through the above employment programmes among others was the height of insincerity.

From that moment, the jokes were no longer funny. John Mahama says in the first year of his future impossible administration, he will pay all funds locked up in the collapsed financial institutions. Was it not this same John Mahama who encouraged fraudulent deals by the financial institutions, which led to the collapse of the banking sector? Was he not the one who allowed his cronies to profit from depositors' funds? Were DKM and MENZGOLD not established and flourished under the watch of JDM? Please, can somebody tell me how many of the depositors of DKM he paid during his term?

Does John Mahama say he will restore collapsed business? Eh Boi! We have not forgotten how the cost of operation for businesses increased so much leading to the collapse of many businesses due to his poor economic management and dumsor. We don't have short memories.

The one that got me laughing uncontrollably was when he said he will fight corruption. Was it not John Mahama who connived with his blood brother to receive bribes from Airbus for the purchase of military aircraft? The Government Official 1 says he will fight corruption yet he has been silent on the Airbus saga. Does he think we have forgotten how he took a brand new Ford Explorer from Burkinabe Contractor for a juicy contract which was poorly performed?

Immediately he said he will pay assembly members to collect data about births of citizens in their community, I knew the gods want to kill him. Do you remember the popular saying about whom the gods wish to kill? So John Mahama claims he doesn't know that Nana Addo has already embarked on an aggressive programme to digitize and decentralize the birth and death registry? What a joke!!

As for the ‘‘church sermon’’ from the running mate, the least said about it the better. I can only assume the church service was nice today. Praise be to God!!

Indeed the alternative is still empty and scary. 4 more 4 Nana to do more. Indeed One good term deserves another.