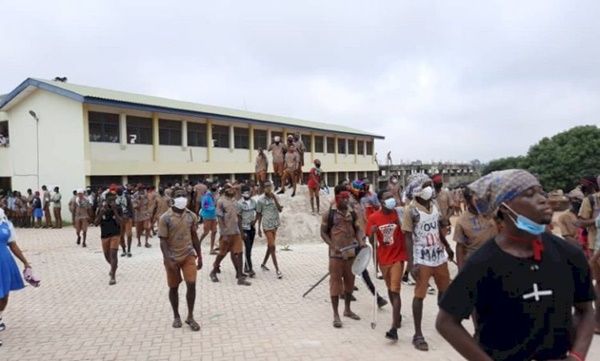 When our Latin master entered our first year class, he greeted us cheerfully saying “Salvete discipuli (good day, students). He taught us to respond saying “salve, tu quoquo magister” (good day to you too, Sir/Master!)

He also taught us that, while “magister” meant teacher/master, discipuli (singular, discipulus) meant a student, or disciple.

He taught us that, the word discipline originated from the same Latin source.  He explained Discipline to be the practice of training people to obey rules and regulations or a code of behaviour, using punishment to correct or enforce infractions and disobedience, for the good of society.

A student or learner was therefore trained to be disciplined.

In addition to academics, we were also taught character building and values like respect for adults and use of decent language even in disagreement. We were taught to be honest and sincere.  We were strongly advised to eschew violence.

Later in life, I would reinforce what we learnt about character and integrity with Televangelist Billy Graham’s quote that,

“When money is lost, nothing is lost

When Health is lost, something is lost,

But when character is lost, all is lost.”

So, what happened with our SHS students?

As if in a coordinated plan, rampaging students across the country destroyed school property. Staff of WAEC were beaten up sustaining injuries as TV showed. The headmaster of Bright SHS, Akim-Tafo is alleged to have incited the attack which resulted in a Graphic reporter being injured.

Not content with that, the students made video clips of themselves warning/cursing authorities including directly insulting the President.

In one of his songs the Nigerian musician, now 78, Chief Commander Ebenezer Obey said in pidgin English “the thing my eye dey see, my mouth no fit talk!” Simply, he could not believe what he was seeing!” So, it is with me!

The angry students said they had been deceived by the authorities who did not set the questions they the students expected. Some added they expected the same questions they had for the mock examinations. They accused the  invigilators of being “too strict.” However, what blew my mind was their claim that, they were denied their “fundamental human right to CHEAT!”

Every student comes from a home. Their primary moral education is thus the responsibility of the parents.  Teachers only continue to build on what parents have already done, if any.

When I saw a picture of the insulting student of Sekondi College with his father apologizing to the President, I asked myself, why did he do this?

As for the students of Tweneboa-Kodua SHS who have apologized for vandalizing school property, I wonder how they expect those after them to use the facilities they have vandalized.

Both NAGRAT and GNAT have stated that, much as the use of insulting language and vandalizing property by the students is reprehensible, this is what these students see their parents including those in very high places do daily.

Without quoting the verse “whatsoever a man soweth, that shall he reap,” they clearly implied it will be hypocritical to blame students fully for being the “fruits” of plantings over a generation ago when massive doses of indiscipline got planted in the Ghanaian body politic.

Sadly, the use of indecent language at high levels continues.

In his book ”Economic Development in the Third World,” MP Todaro stated that, “it is the human resources of a country, and not its capital or material resources, that determine the character and pace of its economic and social development.”

Not surprisingly, even developed countries continue investing heavily in education.

Unfortunately, in recent times, industry has complained about the quality of products they receive from our universities. At a time we must be working at improving our standards, students claim that, their examinations are too difficult hence the rampaging.

Doubtlessly, as Todaro states, education holds the key to any nation’s development. While the acquisition of book knowledge is good, probably a more important part may be moral education to safeguard our resources.

Reports say the Ghana Education Service has dismissed 14 students identified as ring leaders of the unrests. Further disciplinary action will be taken once investigations are completed.

Since the best form of Leadership is Example, let us the adults of Ghana especially senior citizens use decorous and non-violent language the younger generation can proudly learn from. Violent “Rambo/Ramboline-like” behaviour must stop. Calm commonsense approach will yield better dividends than a rowdy leadership approach.

For, as Dr Zig Zigler the motivational speaker said, it is one’s attitude, not aptitude which determines one’s altitude of success for national development.