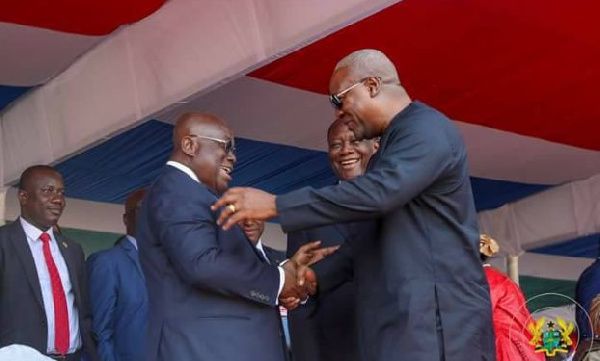 I wrote an article for the BBC back in 2010 that I called Flying Insults. This is how I started that article: “This is a difficult subject for me. But there is so much bad language flying around in Ghana these days it is impossible to ignore the subject of insults. It is in the area of political and public discourse that things appear to be getting out of hand.”

I would crave your indulgence if I lift portions from that article as I try to write about insults in our political sphere today, 10 years later. As the French would say, plus ca change, plus c’est la meme chose.

The President had what I call a face to face moment with a delegation from the Catholic Bishops Conference as he urged them and everybody else who has been calling for a clean campaign devoid of insults to be specific and call out those who insult.

In other words, if Elizabeth Ohene insults Kwasi Anyomi Ohene, call her out and don’t say people should not insult.

Mr Mahama has since then spoken on the subject and far from offering an apology for his choice of words, or hiding behind a claim of his words being misrepresented or taken out of context, he felt he was only matching President Akufo-Addo boot for boot in the area of insults.

According to Mr Mahama, President Akufo-Addo long ago lost the right to complain about insults because he had insulted and regularly insults people. Mr Mahama cited as evidence to back his claim that while in opposition, Akufo-Addo had called the then President Atta Mills Dr Dolittle and since becoming president, he calls his opponents naysayers and Jeremiahs.

Being something of an expert on insults, I have been taking a closer look at these insults. President Mills was called Dr Dolittle. I start with the literal, obvious meaning of the word, Dolittle. So I break up the offending word; a President was being accused of doing little, he was not busy solving Ghana’s problems.

Since President Mills is sadly no longer with us, one has to be careful and not say anything hurtful about him, but I don’t think a description of little activity during his presidency can be taken as an insult.

In other words, it is like saying Elizabeth Ohene is 75 years old; it is not an insult.

Then it occurred to me that maybe Mr Mahama was taking the literary reference of Dolittle in George Bernard Shaw’s play Pygmalion in which we have the characters of Eliza Dolittle and her father Alfred Dolittle.

Granted that this is a play that premiered in London in 1913, there isn’t much in there to get upset about the Dolittle father and daughter characters.

So, I moved to the more popular rendition of the play, in the film, My Fair Lady, based on Pygmalion. That was a beautiful musical and the Dolittle characters were charming. Calling someone after them would not constitute an insult.

It is like saying an article written last year which had no reactions will bring the house down when the same article is published today.

I later discovered there has been a Dr Dolittle Family/Adventure film released in January 2020, but whatever happened in that film cannot be part of the present conversation.

President Akufo-Addo calls his critics Naysayers and Jeremiahs. According to the dictionary, a Naysayer is a person who criticises, objects to, or opposes something.

The dictionary provides a sentence to illustrate the usage of the word: “He continues to win despite the many naysayers”.

Akufo-Addo calls his critics Jeremiahs. Here are the meanings of Jeremiah in the dictionary: A major Hebrew prophet of the seventh and sixth centuries and I might add the first name of a former president of the country and a popular first name of many boys since then.

Another meaning says: A person who is pessimistic about the present and foresees a calamitous future. Every press conference held by the National Democratic Congress (NDC) in the past three and a half years will qualify to be adjudged as such. I thought this precisely was what Mr Mahama had been saying. An insult?

Maybe Mr Mahama is a man of very sensitive disposition and cannot bear what is called the rough and tumble of politics and that is why he regards Dolittle, Naysayer and Jeremiah as insults.

What about Mr Mahama’s reaction to the President complaints? Akyem Sakawa. President Akufo-Addo is an Akyem. Elizabeth Ohene is an Ewe. There is no argument.

I go to Google to get this meaning of the word sakawa: a Ghanaian term for illegal practices which combine modern internet-based fraud with African traditionalist rituals. The rituals, which are mostly in the form of sacrifices, are intended to spiritually manipulate victims so that the scammer’s fraud is successful.

Flag bearer Mahama is happy to cite an ethnic group and bundle them up as people who perform illegal, Internet-based fraud? And these people combine the fraudulent practice with traditional rituals? And this will match Dolittle, boot for boot, to borrow his terminology? Or will Sakawa be on the same wavelength as Jeremiah?

While he was President, Mr Mahama used to provide the best copy for insults that could be used against him. If someone called Candidate Mahama a dead goat, that would be considered an insult. And if you are looking for an Akyem Sakawa correlation, you should hear Candidate Mahama: “when it comes to unleashing violence, no one can beat us to that”.

And here was Candidate Mahama in the Volta Region during the voter registration exercise. He said the Volta Region people had been specially targeted for military invasion. Earlier during the 2016 election he had said ‘his northern brothers’ such as Bawumia had no future in the New Patriotic Party (NPP). He knows how to insult without even trying.

Mr Mahama has shown he is a walking, breathing, laughing insult.

The writer, Elizabeth Akua Ohene, for the avoidance of all doubts and just in case there is anybody out there who is unaware, is a card-carrying member of the NPP. She is a founder member of the party and served as a Minister of State in the John Kufuor Administration and is currently the Chairman of the Disciplinary Committee of the NPP.