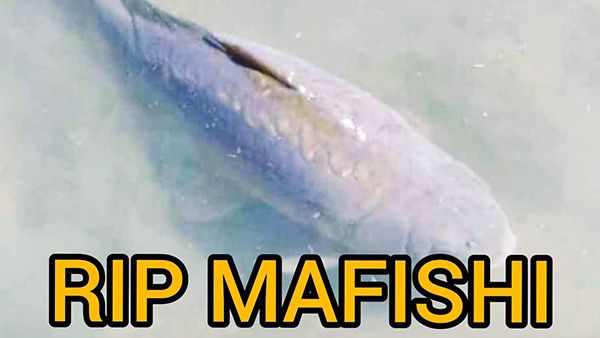 Last week, the Central African country of Zambia was thrown into mourning. President Edgar Lungu led a government delegation to express his condolences. The opposition did similarly. The CSOs were also there. Indeed, the whole of Zambia was there. Zambia was united in grief at the Copper Belt University, Kitwe, Zambia’s second-biggest University.

The deceased was neither professor nor student. The deceased was a fish! Yes…fish! Mafishi which translates “Big Fish” was said to be about twenty-two years old and had lived all its life in a fish pond at the university. Mafishi had assumed iconic status because it was seen as bringing good luck to students during their examinations. Its interesting dance moves also relieved students of stress.

During the same period in Ghana, a frustrated news presenter analysing events of the week asked “what is wrong with us?” At a time the death of a fish had brought Zambians together in mourning, we were busy tearing each other apart and mudslinging at the highest level simply for power, when the Bagre Dam spillage was killing Ghanaians! Divisive language that will only ruin us as a nation flowed freely!

A tit-for-tat game given the name equalization has replaced rational objective commonsensical thinking.

While doing my cadet training overseas in the early 1970s, a General I sat next to at a function asked what my country Ghana’s largest export was. Cocoa, I said. Smiling, he said “no, try again!” When I said cocoa, he shook his head and asked me to try the third time. I told him if he gave me a hundred chances, my answer would be cocoa. He then pointed his index finger at his head! When I asked what that meant, he simply said “brains!”

He then educated me that, there were top Ghanaian engineers in the Detroit automobile industry, in Medicine, Science and Technology as well as in the Arts in the US. He added that there were Ghanaians in NASA sending astronauts to space and back.

Having had the opportunity of traveling the world, I have no doubt about what the General said about Ghana’s brains. So my question, why is our per capita income $ US2,223 while Malaysia’s is $US11,137  when both countries gained independence from Britain in 1957? Worse still, why are we busy insulting one another in the full glare of the world simply because we must have power?

At a meeting in Niamey, Niger during the week, the ECOWAS presidency moving to Ghana made no news. A radio submission was that, if Ghana could suggest that another statue be added to that of Osagyefo Dr Kwame Nkrumah in Addis Ababa, Ethiopia simply with the aim of reducing his iconic stature, to the disbelief of Africans, why should Ghanaians jubilate over an appointment which is only rotational? I felt sad being a Ghanaian, and wondered if Ghanaians love Ghana.

Ghanaians have also been told we have short memories! Therefore we can be told anything and we shall soon forget. However, that claim reminds me of my experience as a lieutenant in the Sinai desert, Egypt while on UN peacekeeping in 1975.

A senior colleague, a captain who did Latin as one of his ‘A’ Level subjects always impressed us with his wits. As we listened to him attentively one day he told us this.

“In life, when somebody takes you for a fool, make him aware that, you might not be as foolish as he thinks you are. You have only chosen to look so for the sake of peace. But at the appropriate time, show him that he was wrong in taking you for a fool!”

Ghanaians certainly do not have short memories!  When appropriate, they demonstrate their ability not to forget.

After the 2016 elections, I had calls from friends from other African countries congratulating Ghana for once again demonstrating leadership. The question is, do we always have to pull back from the brink after such heightened insecurity and fear?

In these “covidian” times, we must put Ghana before all other considerations. We have been a beacon as the Black Star of Africa. We must not allow self-centredness, exploiting petty tribalism to disunite us. We grew up in boarding schools as brothers/sisters unconcerned about tribe.

Perhaps we can learn from Zambia where a dead fish brought humans of all persuasions together.

Ghana is too blessed with human and natural resources to allow our disintegration based on petty selfish considerations of tribe, religion, politics etc. Remember, HUMILTY pays!