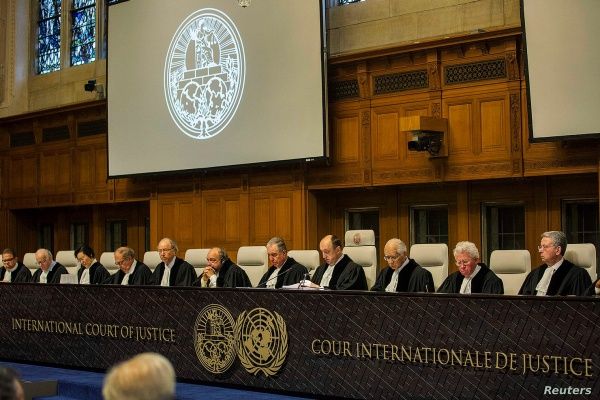 Women of Africa are increasingly demonstrating their resilience in global leadership, financial institutions, international criminal law, the United Nations, the World Bank and the International Criminal Court to name a few. But there is more that needs to be done— the November 11, 2020 elections to the bench of the International Court of Justice (ICJ) provides a unique opportunity for member-states of the African Union to once again demonstrate their support for gender equality by supporting the candidature of Judge Julia Sebutinde of Uganda—the first and only African woman to serve on that court.

Currently, women represent only 20% of the judges on the bench of the ICJ. As the ICJ is poised to celebrate its 75th Anniversary in April 2021, it is noteworthy that historically, out of the 108 judges since the court was established, only four have been women. To date, the principal judicial organ of the United Nations remains the most gender-imbalanced international court in the world. This imbalance has prompted scholars and advocacy groups such as the Gender Equality Campaign (GQUAL) to engage in advocacy for diversifying the ICJ bench. On November 11, 2020, elections will be held to fill five judicial positions on the ICJ. Of the eight candidates on the ballot for this election, three are women; Julia Sebutinde of Uganda, Hanqin Xue of China, and Maja Seršic, of Croatia.

In 2012, Judge Julia Sebutinde made history as the fourth woman to be elected to the bench of the ICJ in over 60 years of the Court’s existence. Judge Sebutinde’s election was remarkable for reasons beyond her gender: she was also the first woman from the African continent to be elected to the ICJ, compared to the 14 African male judges who sat on that court before her. As an international judge, Judge Sebutinde’s appointment signaled the intersections of race, gender, geographical location, and other identities that women from non-western societies must navigate. Judge Sebutinde’s journey to the ICJ, was as a combination of an unwavering ambition to become an international judge, and professional experiences spanning 41 years, having has served as a judge and jurist at national and international levels, including as a judge of the High Court of Uganda and the Special Court for Sierra Leone.

Judge Sebutinde’s multiple and intersecting identities of race, gender, geography, as well as her professional experience are reflective of her journey to the international bench, a journey which she describes as ‘different threads that were woven into a kind of cloth, the kind of cloth that I now am’ (quoted in Judge Julia Sebutinde: An Unbreakable Cloth,” in International Courts and the African Woman Judge: Unveiled Narratives. Judge Sebutinde’s journey as the first woman from an African country to sit on the ICJ is symbolic of the increasing number of African women judges sitting on international courts since 2006. As one of the most gender-imbalanced international courts, the upcoming elections in November to fill the five vacant seats on the bench of the ICJ provides a unique opportunity for the Africa group of States to back the nomination and election of a strong candidate—who just so happens to be a woman!

Judicial selection processes to international courts aspire to meet the highest standards of merit, integrity, professionalism, equal opportunity, inclusion, and diversity. Julia Sebutinde possesses a total of 41 years of experience as a judge and jurist at national, regional, and international levels. Her expertise spans public international law, international humanitarian law, international human rights law, the law of the sea, environmental law, and international criminal law. As a judge at the ICJ since 2012, Judge Sebutinde has contributed to 40 Judgments, 65 Orders of Court, and an Advisory Opinion. Besides her judicial functions, she has served on the Court's essential committees, including the Chamber of Summary Procedure, the Budgetary and Administrative Committee, and Head of the Information and Communications Technology Committee of the Court. As an incumbent judge, she has experience in the internal operations of the Court. She has initiated key internal reforms that have contributed to strengthening the ICJ internally, including internal justice for staff members and the modernization of the Court's processes.

Judge Sebutinde has written many declarations and separate opinions appended to the judgments of the ICJ, thus contributing to its jurisprudence, including a separate opinion to the Chagos Advisory Opinion, in which she elaborated on the right to self-determination in the context of decolonization as having attained peremptory status (jus cogens) under customary international law, from which no derogation is permitted. Judge Sebutinde has delivered numerous papers and public lectures and holds several international awards, including two Honorary Doctorates, in recognition of her contribution to international peace and justice. Having served on the ICJ bench since 2012, Judge Sebutinde brings with her the knowledge and skills of an incumbent judge who has demonstrated that she understands the internal workings of the Court and has contributed to international law through her judicial opinions.

Fourteen male African judges preceded the arrival of Sebutinde as the first African woman judge at the ICJ. The practice has been for the African Union (AU) to endorse the re-election bid of incumbent judges contesting for a second term. Judge Julia Sebutinde is the first and only African woman on the Court, and the first judge whose bid for a second term has not been formally endorsed by the AU and is instead challenged by two male competitors. While AU endorsement does not necessarily mean an automatic election, the fact that the first woman candidate’s bid for re-election has not been endorsed by the AU, calls for further reflection on promises of gender equity in representation. The AU must honor the customary practice of supporting incumbent candidates for re-election by openly supporting the re-election bid of the incumbent candidate who just so happens to a woman.

Gender equality does not mean that women should be nominated or endorsed at the expense of men. The ICJ's infamous historical record as one of the most gender-imbalanced courts in the world requires deliberate action in addressing this disparity. All the former male African judges of the ICJ received the AU's endorsement, and each one served two terms (unless they died in office or voluntarily resigned). Why is the AU refusing to endorse the first and only African woman judge? The lack of endorsement by the AU should send a chilling signal to all member States, international organizations, civil society advocacy groups, women’s organizations, and all individuals interested in gender diversity, inclusion and equal opportunities for all sexes. The AU must affirm its commitments on gender equality contained in multiple legal instruments at the regional and international levels. The election of international court judges should be of concern to all members of the international community. As a principal judicial organ of the United Nations, the bench of the ICJ should symbolically reflect the world’s gender diversity.

The AU must hold true to the progress within the AU system as demonstrated by the election of women judges to the ACtHPR—making it the most gender-balanced court in the world currently. In electing judges to the ICJ, the AU and individual African states have been presented with a unique opportunity to showcase to the world that qualified African women candidates have equitable and strong support from member-states of the AU to serve in international organizations. The AU must live up to its commitment to promoting gender equity, equality, inclusion, and diversity as espoused in the Maputo Protocol. The AU must continue the progress made, as seen in the number of women represented in the African Commission and the African Court (ACtHPR). The African Union must live up to its espousal of gender equality by endorsing the incumbent candidate's re-election—who has the merit, comes with a wealth of international law experience, and just so happens to be a woman!