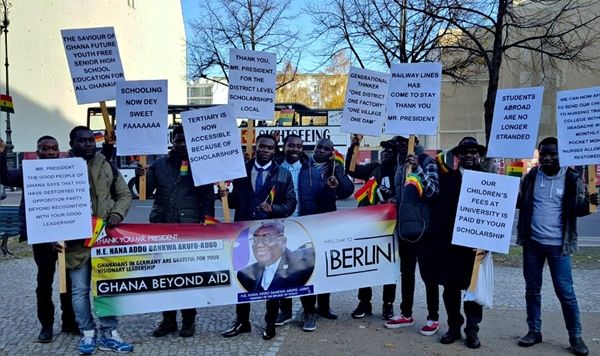 We would like to congratulate the Electoral Commission of Ghana led by Madam Jean Mensah for how they have successfully compiled a new register for the 2020 elections and beyond.

The EC deserves commendation particularly given the amount of rancour that preceded the registration process. Ghanaians were fretted about the entire exercise owing to the deliberate NDC-sponsored fear-mongering. As per the constitution, the EC has unfettered constitutional powers to carry out its mandate in accordance with the constitution.

As clear as this constitutional provision is, the NDC and its privies, allies, and proxies, went on a bile campaign to bastardise the EC with special attention on its chair, Madam Jean Mensah. Ghanaians recall how the NDC in power, through its flagbearer, then President Mahama, defended the constitutional immunity of the EC but have surprisingly, albeit typically, thrown their once revered stance to the dogs for political expediency.

With the abled leadership of the President, H.E. Nana Addo Dankwa Akufo-Addo, the doom and gloom predicted and yearned for by the NDC, didn't see the light of the day. The Youth Wing ©️ is proud of the demonstrable leadership shown by the President in the face of the heavy turbulence generated by the NDC and the barefaced lies thrown at his personality.

Contrary to the allegation of voter suppression thrown at the President by the NDC and their assigns, the data so far has shown that no such thing occurred. The allegation of using the military to intimidate people has proven to be a sham and a frolic of the NDC's unhinged imagination. Indeed the NPP's long-held view that foreigners have found their way onto our register, is confirmed by the many foreigners who are standing trial for attempting to register. Others have already been handed jail sentences by our courts.

Security agencies have conducted themselves well in the execution of their duty to police our borders and secure them from intrusion. Is it not amazing that anytime the issue of preventing foreigners from registering in Ghana to vote is mentioned, the NDC becomes uncomfortable? Why can't the NDC bring suggestions forward on how to achieve a clean register?

As mentioned by his excellency, and reinforced by many credible surveys, the President is on a sound footing as far as a victory in 2020 is concerned. No voter needs to be suppressed before the inevitable defeat of the NDC can be achieved. All the attempts to fuel ethnic tensions have failed due to the exceptional leadership of President Nana Addo Dankwa Akufo-Addo who refused to be provoked.

Transparency of the EC in this process has been phenomenal. All parties were given daily printouts of registration at each and every polling station. Additionally, the EC gave periodic updates on the state of affairs in terms of the statistics and the next line of action. This is an extra layer of transparency which makes it impossible for manipulation as alleged by the NDC.

Ghana has a long history of pockets of violence during registration exercises and this year is no exception. The NPP Germany branch Youth Wing ©️ joins the many decent voices to condemn any acts of violence that ensued during the process at few locations. Though we acknowledge these kinds of cases have become a regular feature of our registration exercises, it is our contention that, this year's cases are far lower than what we witnessed under previous regimes.

We commend the over 16 million Ghanaians, who came out in their numbers to register to assert their franchise come 2020 without fear. Ghana has once again proven to be a bastion of democracy in Africa. This feat is to the glory of all Ghanaians.

Also, the yeomanry of the National Executive Committee of the NPP and the party agents who are mostly the unsung heroes is highly commendable. We single out Mr. John Boadu, Sammy Awuku, and Lawyer Henry Nana Boakye Nana B for special mention for their super commitment throughout the exercise. Kudos to these gallant officers.

It is our prayer and hope, that, under the competent leadership of H.E. Nana Addo Dankwa Akufo-Addo, H.E. Dr. Mahamudu Bawumia and the credible EC, Ghana will witness incidence-free elections that will keep NDC in opposition again in 2020, giving room to #4More4Nana To do more for Ghanaians.