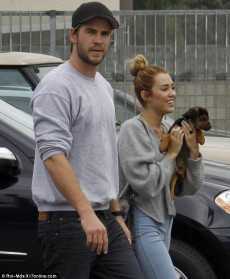 Miley Cyrus, 26, and Liam Hemsworth's, 29, breakup news shocked fans all around the world on Saturday after just seven months of marriage.

But according to sources, people close to them are not all that surprised.

The beauty broke her silence on the matter on Sunday morning saying she was going to let life take its path in its own time, as reports revealed their split 'wasn't surprising' as they had 'a lot of issues'.