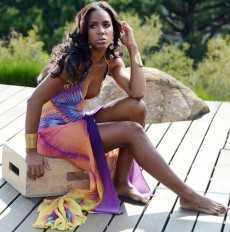 AceShowbiz - Kelly Rowland may be single again. The 38-year-old singer reportedly has split from her husband Tim Weatherspoon after being married for a little over 5 years. Sources close to the singer believe that they are either separated or in the process of filing for divorce.

Fueling the speculation was Kelly's recent sightings, during which she was spotted ditching her wedding ring. The former Destiny's Child member previously always wore the gold band, even when she went to the gym.