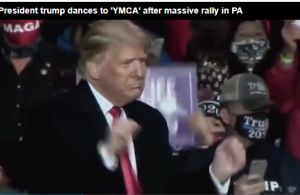 Donald Trump broke in to a dad dance Tuesday night as the Village People's YMCA started playing at the end of his Pennsylvania rally - soon after he had told COVID sufferers he 'felt their pain' and boasted he was 'immune' from the virus.

The president launched into some awkward moves on stage in Johnstown as he closed out his second campaign rally since his four-day stint in hospital with the deadly virus.

Trump told the cheering crowd he would 'make America safe again' and 'make America great again' before the classic Village People hit started blasting out.  He then burst into dance, bobbing his knees and fist pumping the air along to the tune.