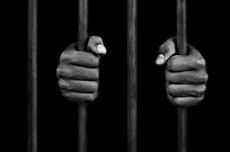 The police at Abokobi have finally apprehended the leader of a three-armed robbery gang that allegedly attacked and robbed a businessman in his shop at Pantang, near Abokobi, in broad daylight.

The victim, according to the police, was tied at gunpoint by the three armed robbers led by Tenkorang Bimpong, 36, who then ransacked the shop on Thursday, August 1.

They took away 15 laptops, 50 mobile phones as well as a 32 inches LG flat-screen TV and other accessories all valued at GH¢30,000.

He said the complainant narrated to the police that on August 1 around 1:45 p.m. at Pantang Village, three young men armed with pistols entered his shop and tied him up before carting the goods into a waiting car with private registration.

Police intelligence first led to the arrest of one Collins Ofosu, 26, at the Madina Zongo Junction in Accra on August 4, 2019, selling a laptop which was part of the stolen items.

Upon interrogation, the name of Bimpong popped up as the supplier of the said laptop.

“The complainant also confirmed to the police that Collins was not part of the suspects who attacked him at his shop even though the recovered laptop was his,” the police officer narrated.

On August 8, 2019, police investigations again led to the arrest of Tenkorang at Madina Atomic Junction, Accra, saying “his arrest led to the recovery of an LG 32 inches flat-screen TV, an Acer laptop and two mobile phones, all of which the complainant identified as his.”

She said they were investigating further to get the other accomplices.