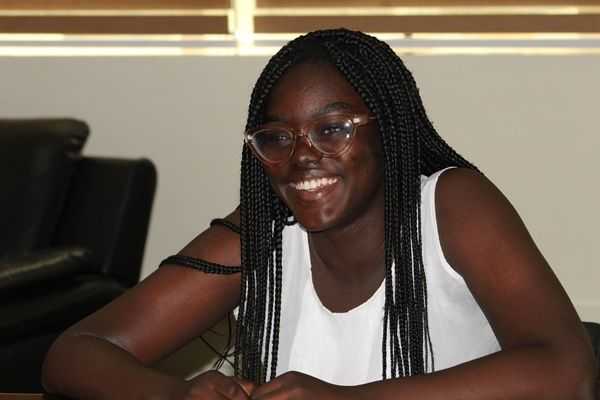 An A-level Commerce student of Tema-based DPS International (DPSI), Nana Afrakoma Otoo, has brought laurels to Ghana and has carved a niche for DPSI in the global academic arena as she picked a bronze medal in the 2019 edition of the International Economics Olympiad held in St. Petersburgh, Russia.

She may have taken one month to prepare for the competition whereas some first-year university students might have taken one full year to prepare. Her passion and expertise for the subject – Economics enabled her to put up an excellent performance for her school and country.

The International Economics Olympiad held in St. Petersburg, Russia, is a worldwide recognized programme organized for A-level and first-year College students from around the globe.

Students from Ghana have participated in the 2019 edition for the first time.

A total of 130 A-level and first-year university students from 24 countries around the world, participated in the Olympiad.

Brilliant Afrakoma Otoo was one of two students from DPS International who represented Ghana with excellence.

The other A-level Commerce student who represented DPS International and Ghana was Clive Daryl Andoh-Dontoh.

‘I’ve Learned To Believe Myself’

Young Afrakoma Otoo told the press on Friday, August 9, 2019, in Tema that she initially thought she was not really prepared for the competition.

She said, “Although I thought I wasn’t prepared for the competition, I still won something.”

“I think that it’s a lesson to me that I should always believe in myself,” she added.

An economics teacher at DPS International, Mr.Emmanuel Larbi, who accompanied the two students to Russia, reported that this year’s Olympiad was highly involving and enriching.

He noted that the students were made to undertake economics exams on higher level of learning.

According to him, the students who participated were also made to make business case presentation.

Aside from that, he said, students were also made to undertake experiments in financial literacy.

Based on that, he stated, they were assessed and rewarded accordingly.

He revealed that Afrakoma Otoo and Clive Andoh-Dontoh were both selected to represent the school and the country for that matter based on their meritorious performance in the school.

DPSI Ghana was founded in September 2010 by renowned Indian industrialist and philanthropist, Mukesh Thakwani, under the aegis of Delhi Public School a chain of schools all around the globe known for its holistic education.

Mr Thakwani’s mission is to champion the cause of education in the West African sub-region, by providing a world-class educational system.

DPS International, Ghana is affiliated to the University of Cambridge International Examinations and Central Board of Secondary Education, New Delhi (CBSE).