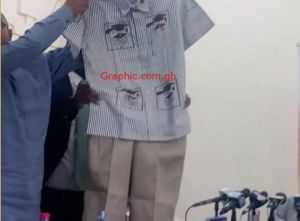 The attention of the Management of the Ghana Education Service (GES) has been drawn to the discussion in the media on the alleged importation of school uniforms by the institution.

“Management wishes to make it clear that the story is baseless and has no merit whatsoever and has therefore urged the general public to disregard the erroneous publication.”

These were contained in a release signed by Ms Cassandra Twum Ampofo, Head of Public Relations Unit and copied the Ghana News Agency.

“GES wishes to state that it has not imported neither has it contracted any individual, locally or internationally to bring in new uniform for the Junior High Schools”.

It would be recalled that on April this year, Professor Kwasi Amankwa, the Director General of GES introduced a sample of the new uniform and its design in the media.

He then urged parents to access those clothes from the open market as it had been the case with the current uniform.

It must be noted that the school uniform is not compulsory, the statement added.

It would be phased out over a period and no student would be prevented from attending school when the 2019/ 2020 academic year begins in September.