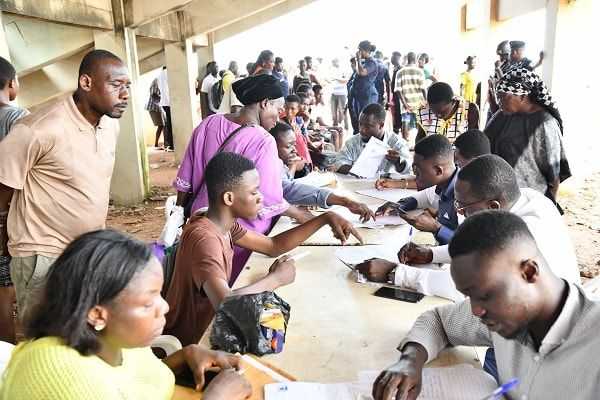 The Ghana Education Service (GES) has said that majority of Basic Education Certificate Examination (BECE) candidates who have thronged the Black Stars Square with their parents in connection with placement into senior high schools (SHSs) and technical and vocational institutes (TVIs) have already been placed by the Computerised Schools Selection and Placement System (CSSPS) but are now “shopping for better schools than those they have been placed”.

A Deputy Director-General of the GES in charge of Access and Quality, Dr Kwabena Bempah Tandoh, explained that available statistics showed that nine out of every 10 candidates, representing 90.5 per cent, had been placed in schools.


In an interview with the Daily Graphic on Tuesday, September 17, he said although there were candidates with genuine cases concerning placement at the Solution centres, they had been overshadowed by those "shopping".

In a live demonstration of the front and back ends of the placement system to the Daily Graphic, Dr Tandoh showed how the placement was being done and the number of candidates who kept accepting the placement and enrolling in schools.

“This is a constant update of the rate of students placed and enrolled by schools,” he explained, adding that currently, less than 10 per cent of candidates had not been placed and urged them to access the self-placement model with the same pin code to place themselves in the available schools.

He pleaded with parents and the candidates to accept the schools they were placed “because those are their own choices”.

Dr Tandoh stressed that the Solution centres were not created for parents and students to go and change their schools of placement, explaining that the centres were created to assist genuine cases, such as a male candidate being placed in a girls’ school or an able candidate being placed in a special school such as the Mampong School for the Deaf or the Akropong School for the Blind.

There were chaotic scenes at the Black Star Square in Accra last Monday when hundreds of desperate parents, guardians and students besieged the Accra Solution Centre set up by the GES to handle concerns relating to the placement of prospective students in SHSs and TVIs.

In the process, seven people, including four female students, a pregnant woman and two male students, collapsed and were rushed to the Greater Accra Regional Hospital, where they were treated and discharged.

According to sources, the incident happened when the parents and the students surged forward in a frantic effort to reach officials at the centre.

The chaotic situation compelled the officials to call for police reinforcement to instil law and order at the venue.

As a result of the confusion, officials of the exercise suspended the process around 12 noon yesterday and asked the parents and their children to go home, with the assurance that the exercise would resume the following day.

At a point, armed policemen were placed at the entrance to the centre to prevent the crowd from gaining access to the centre.

But Dr Tandoh said the action of the parents and the candidates was exaggerated, insisting that the candidates were made to select schools of their choice before the release of the results and, therefore, he did not understand the massing up at the Solution Centre to get the placement changed.

He said the choice of school and programme and residency status of candidate was purely done by the candidate, explaining that it was almost impossible for a candidate to be placed in a school that he or she did not choose under the CSSPS.

Dr Tandoh appealed to parents to help their children to check their placement status, saying if the children had not been placed, they should help the children do self-placement, adding: “Coming to the Black Star Square does not help matters.”

Dr Tandoh said the 30 per cent quota was not a novelty but was termed “catchment area protocol”, which the current administration felt was being abused, for which reason it rechristened it “30 per cent public equity”.