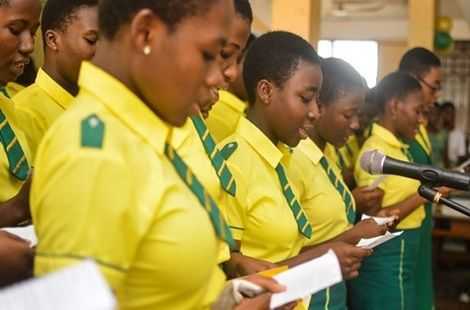 He said if the students excelled in their examination, they would put the "naysayers" of the programme to shame.

The President said it was the wish of those who opposed the programme that the first batch of students fail their examination for the critics to castigate the government and, therefore, asked the beneficiaries of the programme to use the opportunity offered them to perform well in their WASSCE.

President Akufo-Addo was speaking during an interaction with the staff and students of the Sunyani SHS yesterday as part of his two-day visit to the Bono Region.

He also inspected two dormitory blocks and a 12-unit classroom block being constructed at a cost of GH¢3.8 million in the school as part of efforts to improve infrastructure in SHSs to increase intake.

The government, he said, was, therefore, committed to educating the youth to enable them to compete favourably with their counterparts in the rest of the world.

"This is the first SHS I am visiting since students from forms one to three reported to school this year," he said, and commended the Minister of Education, Dr Matthew Opoku Prempeh, and officials of the ministry for laying the structures for the successful implementation of the programme.

Earlier, the President had addressed members of the erstwhile Brong Ahafo Regional House of Chiefs and said a Legislative Instrument for the creation of houses of chiefs for the six newly created regions and the existing houses from which they were carved would be placed before Parliament.

He also addressed a durbar of the chiefs and the people of New Dormaa, a suburb of Sunyani, during which he assured them that the Sunyani-New Dormaa-Kootokrom road would be awarded on contract by the end of the month.

The Minister of Education said the government had not paid lip service to its promise of providing free second-cycle education for students.

He said before the implementation of the programme, the entire student population in SHSs was 880,000, with an attrition rate of 20 per cent.

"Within the last three years, the student population in SHSs has increased to 1.24 million, an increase of 43 per cent," he said.

Dr Opoku Prempeh said this year, GH¢2.4 billion would be spent on the free SHS programme, describing it as the best investment in the country's future leaders.

On poor roads in the Bono Region, the Minister of Roads and Highways, Mr Kwasi Amoako-Atta, said the government had raised GH¢2.2 billion to pay contractors to enable them to execute some road projects in the country.

According to him, out of the 78,000 kilometres of feeder and urban roads and highways in the country, only 23 per cent was tarred when the government took over in 2017.

For his part, the Minister of Food and Agriculture, Dr Owusu Afriyie Akoto, assured cashew farmers in the region that Parliament would pass the Tree Crop Authority Bill before the end of the year to address the pricing challenges in the cashew sector.