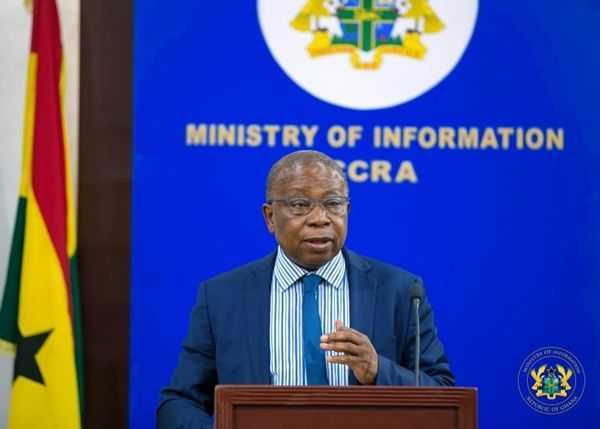 The Minister for Health, Honourable Kwaku Agyeman-Manu, has reiterated that the ten polyclinics that were being constructed by former president Mahama’s administration in the Central region have all been completed and commissioned by the Nana Addo Dankwa Akufo Addo led government.

“They were commissioned as at August 2018. I went there physically to commission the facilities after completion. When we came , they were at the very early stages of construction, and all of them, I signed not less than 32 certificates for them to assess funds to continue work”, the Health minister emphasised.

The Minister added that the Nana Addo government inherited these projects at very early stages of constructions and he had to sign 32 certificates on each of them before the completion of the projects.

Meanwhile, Mr. Agyeman Manu insisted that upon commissioning of the projects, the former deputy minister for Finance, Ato Forson accused him of taking credit for the project started by the erstwhile Mahama administration.

“He was thinking we were taking credit since he started the projects and I said that was not what I came to do. In his presence, I told honourable this was started by the previous regime and we don’t have any obligation to leave them standing so we had continued and completed just like president Mills commissioned the N1 motor way that was started by Kuffuor in the same spirit, President Akufo Addo will do what was left behind that we should do”, the Health Minister added.

Mr. Agyeman Manu indicated that in Greater Accra, only cabinet approvals  were given on five polyclinics by the Mahama led government which the Nana Addo administration inherited but, the government went ahead to assess funding and completed all the five projects. These project are located in Ashaiman, Botiano, Sege, Adenta, and Oduman.

“All of them have been completed, commissioned and we have our staff working in them, as I speak now, there were eight hospitals packaged as a single project being done by a contractor under President Kuffuor and we still have not completed all of them”, Mr: Agyeman Manu added.

On the Contrary, projects started by the Kuffour administration have been abandoned by the National Democratic Congress (NDC) under former President Mahama.

He highlighted the major rehabilitation and upgrading of the Tamale Teaching Hospital. He indicated that the hospital’s Operating Theatres, Nurse’s station and Neonatal Intensive Care Unit (NICU) Bay were being upgraded. The others included the waiting area and the hospital’s building as a whole. The contract was awarded to Messrs VAMED and has been commissioned since March, 2019 and currently in use.

He touched on the five district hospitals which are being constructed in Wheta in the Ketu North district of the Volta Region, Somanya in the Yilo Krobo district- Eastern Region, Sawla in the Sawla-Tuna-Kalba district, Buipe in the Central Gonja district and Tolon in the Tolon Kumbugu district all in the Northern Region. A polyclinic is also being constructed in Bamboi in Bole District of the Northern Region. The projects were awarded to Messrs VAMED are 55% complete.

In addition, he said that the progress of work on the design, construction and equipping of seven district hospitals, an integrated IT Systems in Ghana was scheduled to be completed in December 2016. Work done as at the time of suspension in December 2016 was 51% across all site. The overall physical work so far is 61% and gave the breakdown as follows; Dodowa is 100%, Takoradi European (Housing) and Fomena are 85% complete, Kumawu is 43% complete, Abetifi is 35% complete, Secondi (Kansawrodo), Garu 5% and 2% complete respectively.

Mr: Manu, further explained that, issues leading to the suspension of aforementioned projects have been resolved. Government and the contractor are working on resuming work by end of October 2019. Construction works on three sites, namely; Kumawu, Fomena and Takoradi European is expected to be completed by June 2019. The remaining hospitals at Sekondi, Garu and Abetifi are scheduled to be completed by 2021.

He hinted on the construction of 15 CHPS Compounds at various levels of completion. Eight of which are to be completed and handed over by December 2019 and 26 more compounds set to commence by January 2020.

He noted that phase one of the University of Ghana Medical Centre has also been completed and operational since 18th July 2018 for Out Patient services and phase two of the project has commenced with the signing of a contract  amount of 40.5million  EURO.

Additionally, works on the completion and equipping of Bekwai District Hospital has commenced since June 2019.

The Minister disclosed that old projects that had to be phased out due to funding constraints and those on the drawing board for the last five years and beyond have received Government approval to proceed. The following projects have received cabinet and parliamentary approval for implementation to commence;

5.      Completion Of Maternity And Childrens Block At Kath