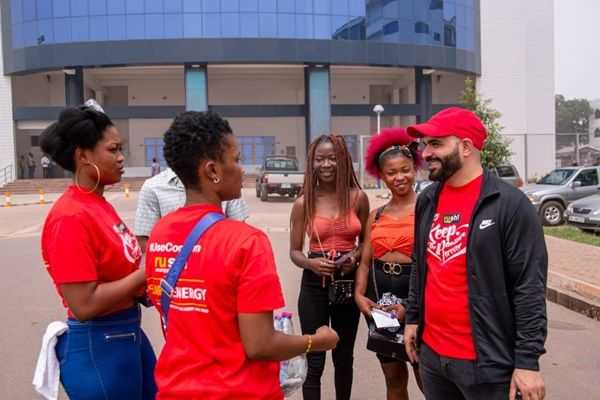 Twellium Industrial Company stormed the University of Ghana and UPSA campuses to share over 1500 pieces of female and male condoms and other products as part of the Valentine’s Day celebrations.

The decision comes on the back of a research made by the Ghana Aids Commission on the high rise of HIV-AIDS curses in some part of Accra during 2019.

The distribution was done by some celebrates led by actress Benedicta Gafah, top model Edem Fairre, Nana Made in China, Dezel the model and other influencers.

The Marketing Director of Twellium, Mr. Ali Ajami, during the distribution asked students to use protection during sex if they can’t abstain.

“So we thought it wise to share condoms and our products to the students and also educate them on the need of protecting themselves as they celebrate this year’s Valentine day.” He said

Twellium Industrial Company was incorporated in Ghana in September 2013, to kick start the production of 4 key franchised products. These include Rush Energy drink, Original American Cola, Planet Range and Bubble Up lemon lime. While the company specializes in the production of irresistible non-alcoholic beverages, it also prides itself in its flagship product, Verna Mineral Water, for its clean, tasty and refreshing appeal, as confirmed by target market and consumers.