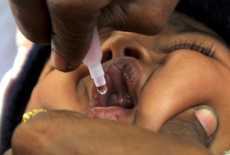 Dr Luis Amoussou-Gohoungo, Deputy Accra Regional Director of Health Services in charge of Public Health says multiple doses of polio vaccine to be given during the third phase of the Polio Immunization Campaign are safe.

“The multiple doses of polio vaccine will not cause any harm but rather increase protection for your child.”

He, therefore, encouraged parents and guardians to allow their wards to be vaccinated in the second round, phase three of the campaign scheduled between Thursday October 8 and Sunday October 11.

Dr. Amoussou-Gohoungo at a press conference in Accra on Wednesday, said the second round of the third phase of the immunization exercise was targeted at vaccinating about 1,011,53 children under five years in all 29 districts in Accra.

He said the polio vaccines were effective, safe and free and would be administered by trained vaccination teams from house to house.

Dr. Amoussou-Gohoungo said in the second round, children from six months to five years old would also be given a Vitamin A supplementation to make them strong and healthy.

He noted that at the end of the first round, a total of 1,073,124 were successfully vaccinated.

Since July 2019, Ghana and its neighboring countries have had challenges with the “circulating vaccine derived poliovirus type 2” outbreaks.

A total of 30 cases of the type 2 poliovirus have been confirmed in Ghana from July 2019 to date.

Africa has been declared free from wild poliovirus, but another from of the poliovirus, which occurs in under-immunized communities with poor hygiene and sanitation continue to spread in 16 African countries and has paralyzed over 170 children in Africa this year.

Dr Amoyussou-Gohoungo said it was, however, critical to vaccinate every child and strengthen routine immunization saying, we cannot stop until every child can live a life free of polio.