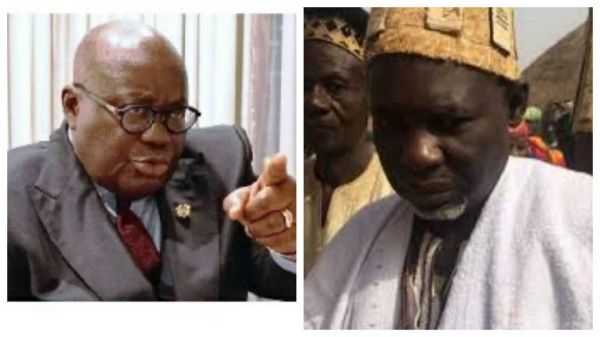 Tension is mounting like a thick dark smoke beneath a heap of sawdust in the Nanton Traditional Area of the Northern Region, as some aggrieved sub and divisional chiefs backed by majority of their youth are demanding the immediate removal of an alleged self-imposed chief of Nanton, Zoosal-Lana Haruna Sulemana from the Nanton skin.

Forty-five out of 57 sub and divisional chiefs of Nanton at a News  conference organised  at Wovugu and addressed by Mr. Adam Dokurugu, Secretary of the Chiefs, appealed to President Nana Addo Dankwa Akufo-Addo to caution the Zoosal-Lana, who is a former Northern Regional Chairman of NPP to vacate the Nanton skin for the rightful occupant, Nanton Naa Mahamudu V.

According to the aggrieved Chiefs, Zoosal-Lana Haruna Sulemana a.k.a Arumbees, since April 2019, “with the backing of some political elements in government is holding himself as the chief of Nanton against the approval and authorisation of the Overlord of Dagbon (Ya-Na), the appointing authority”.

They indicated that in as much as they cherish the prevailing peace in Dagbon and appreciate the efforts of President Akufo-Addo in restoring the peace and unity of the area, they could no longer tolerate the behaviour of the Zoosal-Lana, which is creating division, mistrust, disunity and needless tension among the subjects.

Also, in a petition to President Akufo-Addo through the Regional Coordinating Council, Tamale, the chiefs said: "We write to you as father of our great nation Ghana, to appeal to you to order the immediate removal and arrest of Zoosal-Lana Haruna Sulemana ( a.k.a Arumbees)  from Nanton to pave way for the arrival of our chief Nanton Naa Mahamadu V,  to Nanton to assume duty as the legitimately enskinned chief of the Nanton Traditional Area."

The petition believed in President Akufo-Addo sincerity because the bold steps that led to the landmark funerals of our beloved late Naa Mahamadu Abdulai  and Naa Yakubu II is unprecedented, despite the allegations that you had a covert interest to screw the process for the benefit of the Abudu Royal Family.

"Mr President, you demonstrated both in word and action your commitment to the Dagbon Peace Process. However, we regret to state that your commitment is not in tandem with the interest of some of your appointees. Majority of us believe you have good intention for us, but some of your political appointees consider their personal interest more superior to your vision for Dagbon," it added.

"Your Excellency, Zoosal-Lana is fast burning your good name and that of your government because his capabilities are well known, and he could not have conceptualized this lawlessness and impunity had it not been that your government is in office. Zoosal-Lana and his unelected supporters in sensitive government offices are displaying their crass disrespect for your commitment for Dagbon peace, the Ya-Na, and the traditions and customs of Dagbon".

The petition further indicated that: "The Ya-Na has enskinned about 40 chiefs and sub-chiefs with over 100 unsuccessful contestants who did not get positions, yet no one raised a finger at him, except a man who believes his credentials as former NPP Northern Regional chairman, with a powerful sister in the presidency and Hon Ambrose Dery, as an in-law, are there to help."

The Chiefs at the news conference served a notice to the  elements in government supporting “the criminal behaviour of the Zoosal-Lana”, to back off,  which also sought to undermine the promise by the current government not to interfere in the Dagbon chieftaincy matters.

“To engender peace in the entire Dagbon and avoid needless political interference in chieftaincy, we expect government and national security apparatus to expedite action in removing Zoosal-Lana from Nanton and allow our legitimately enskinned Chief, Nanton Naa Mahamadu V to come back home to assume his rightful traditional duties for peace and development to blossom within our Traditional Area.This will give true meaning to the president’s assured neutrality of his government in Dagbon chieftaincy matters”.

The Chiefs also appealed to President Akufo-Addo to order REGSEC to take the necessary security measures to facilitate the removal of the Zoosal-Lana from Nanton and the safe arrival of their legitimately enskinned chief, Nanton Naa Mahamadu V.

On April 01, this year, after the performance of late Nanton Naa Sulley’s funeral, about 18 royal contenders assembled at the Gbewaa Palace to express their interest in the Nanton Skin. After rigorous traditional and customary screening and appraisal, Nanton Naa Mahamadu V was selected by the Ya-Na as the new Nanton Naa.

Zoosal-Lana Haruna Sulemana, quickly moved to Nanton township and organised some thugs from certain external villages and communities from Nanton Traditional Area to erect unlawful road barriers, burnt lorry tyres and harassed unsuspecting road users, all in the name of Nanton people, who are purportedly against the choice of the Ya-Na for the Nanton Skin.

Apart from stating that the Nanton Skin is exclusively for members of the Abudu Royal and that the youth of Nanton prefer him as their chief, the Zoosal-Lana, in an audio and video recording, openly mentioned that he built a storey building in Nanton, constructed a dam for Nanton and supported some indigenes of Nanton to pay their school fees.

We wish to remind the Zoosal-Lana that the above reasons do not qualify anybody to a title of chieftain in Dagbon. It’s the Ya-Na who has the sole authority through customary and traditional screening processes to select chiefs for any part of Dagbon, or his authorised assignee could do so on his behalf. More so, there is no single town or village in Dagbon that is traditionally exclusive to one Gate of the Dagbon divide.

Again, for the Zoosal-Lana to state  openly in that audio and video that the Ya-Na is a ‘‘committee Ya-Na’’ and in a temporary role, and therefore he is not answerable to him, smacks of gross disrespect to all chiefs and royals of Dagbon, aside its inherent security implications on the Ya-Na.

“As we (45 divisional chiefs) are in the majority, we are not oblivious of our superior power and numbers to overcome these cowards parading as brave warriors in Nanton, but for our singular respect for the Dagbon Peace Process and the President of Ghana’s vow to support the Ya-Na to unite Dagbon as ABUDANI I, gave us hope that this situation will soon change, but that is not what we are experiencing”.