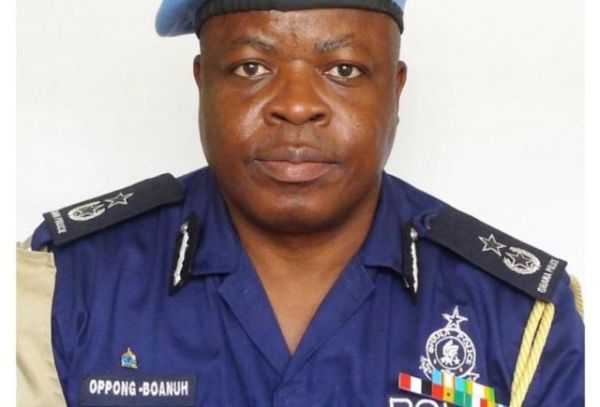 The Acting Inspector-General of Police (IGP), Mr James Oppong-Boanuh, has acceded to the request of the families of the four girls who have been missing in Takoradi since last year, to have their representatives witness the DNA and forensic tests to be conducted on the skeletons of four persons retrieved from a cesspit at Kansaworodo and in a well at Nkroful, both suburbs of the twin-city in a bid to establish the identities of these persons.

In separate meetings with the IGP at their respective homes yesterday, the families reiterated the request they made last week at a press conference, and it received a positive response, paving the way for the police to continue with their investigations on the missing girls and the findings made during an operation last week.

Spokespersons for the families, who spoke to the Daily Graphic after the meeting with the IGP, said the Police Chief gave an assurance that they would be allowed to witness the forensic examination if they so wished.

“At least, we have that assurance from the police team, led by the IGP that visited us and we are grateful for that.

“ We have already indicated our request to have an independent pathologist be part of the test and we have been given the permission to do so,” Mr Alexander Koranchie, father of one of the missing girls, told the Daily Graphic.

The IGP and his entourage later proceeded to Nsuaem to meet the biological mother of Ruth Abakah, Ms Cecilia Owusu Ayisah, who has also expressed her readiness to assist the police in their investigation.

Speaking to the media after closed-door meetings with the families, the Director of Public Affairs of the Ghana Police Service, Assistant Commissioner of Police (ACP) Mr David Eklu, said the purpose of the visit was to enable the IGP to personally interact with the families and listen to their concerns.

“We have had several concerns raised by the families through the traditional media and the visit has actually afforded the IGP the opportunity to listen to the families and also update them on the stages of the investigations,” he said.

One of the most important aspects of the visit, he said, was to elicit the support of the families in the quest of the police to unravel the whereabouts of the missing girls.

After an initial objection, the families last week rescinded their decision and agreed to cooperate with the police to conduct DNA and forensic tests to establish the identities of the remains found in a cesspit at Kansaworodo and in a well at Nkroful respectively.

With the go-ahead from the family, Mr Eklu said the samples from the families would be collected today for the investigations to continue.

“After a successful visit and interactions, I must say the indications from the four families are positive. Barring any last-minute change, we should begin the process of taking the samples for the DNA examination today,” he said.

As a follow-up to the visit and to ensure regular interactions with the families and free flow of information, ACP Eklu indicated the acting IGP had appointed ACP Rev. Fr Arthur, who is the Director, Religious Affairs, at the Police Headquarters, as the family liaison officer, to be supported by the Western Regional Command in engaging the families.

The Command and the liaison officer would constantly update the families on the progress and efforts in getting to the bottom of the case.

The families commended the IGP for taking time off to visit them in their homes to interact with them.

In an emotionally filled atmosphere, the families maintained that there was nothing more encouraging than the IGP himself meeting them in their respective homes to listen and share in their grief.

They also reassured the IGP and his team that they would avail themselves of the DNA and other forensic tests to establish the veracity of the human remains found in a cesspit and a well at Kansaworondo and Nkroful respectively.

The spokesperson for the Quayson family, Mr Michael Grant Hayford, said since the inception of the case, “the interaction with the IGP is the most satisfying compared to the previous ones.”

“We expressed ourselves, he asked us questions and even directed some at the police at the Regional Command and gave us the chance to ask whatever questions or doubts on our minds,” he added.

“We from the Quayson family told the IGP that we will be interested in conducting our private investigation and he agreed. We are happy that he told us that whatever the outcome would not mean the end of the case, he assured us it will be investigated to the end,” Mr Hayford said.

According to him, the IGP told them if any of the family members wished to witness the process, they would be permitted to do so.

Mr Alexander Koranchie, the father of Mantebea Koranchie, who for the first time since his daughter went missing looked cheerful as he spoke to the Daily Graphic, said: “My family welcomes the IGP and his entourage to interact with us. He also assured us that the remains were yet to be proven and his request for the families’ support for the process to establish the fact would be honoured.

The IGP, according to Mr Eklu, also assured them that those issues would be resolved.

He said the IGP also assured the families that after every major operation, such as the missing cases under investigation, there was a review to find out what went wrong and that every lapse identified would be documented to guide the police in future operations.

“During the review process, if we find any negligence on the part of those involved in the operation, the necessary action will be taken per the rules of engagement,” Mr Oppong-Boanuh was quoted as saying.

Fate of officers on duty

On the fate of personnel who were on duty before the man suspected of kidnapping the girls, Samuel Udoetuk-Willis, escaped from custody, ACP Eklu said: “The four police officers on duty have gone through the disciplinary procedures, and the report was submitted to the police headquarters in July. It would be reviewed for the necessary actions to be taken.”