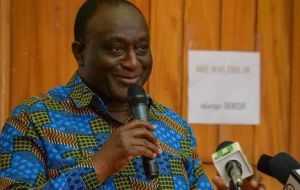 The Minister of Trade and Industry, Mr Alan Kyerematen, has called on the Association of Ghana Industries (AGI) to critically examine the government’s fiscal and industrialisation policies and make the necessary recommendations for improvement of those guidelines.

He said the degree of competitiveness of local companies was born out of the prudence of government policies, coupled with the operational efficiency of businesses.

"I want to urge the AGI to take a critical look at the industrialisation policies and programmes of the government, identify the gaps and make suggestions to address those lapses to improve the competitiveness of local companies.

"But, in doing this, you must also note that government policies alone are not accountable for competitive industries. So audit your own businesses and look at your deficiencies, so that we can holistically deal with the lapses to make our companies more competitive," he said at the opening of a three-day industrial summit in Accra yesterday.

The summit was organised by the AGI, in partnership with the Volta River Authority (VRA), the Ghana Investment Promotion Centre (GIPC) and other collaborators.

It is on the theme: "Strengthening Ghanaian industries for global competitiveness".

Discussions at the summit will focus on key areas such as financing for competitiveness, appraisal of government's industrialisation policies, leveraging innovation to accelerate industrial growth and development and assessing Ghana's strategy towards industrial growth, in the wake of the implementation of the African Continental Free Trade Area (AfCFTA) agreement.

Mr Kyerematen said the government was committed to creating a conducive environment for businesses to expand, which was why prudent measures had been taken to stabilise the macroeconomic environment and provide fiscal incentives for businesses.

The minister also noted that the One-district, One-factory (1D1F) policy was ample testimony that the government had a clear strategy to partner the private sector to transform the economy through industrialisation.

He further stated that the financial sector reforms that the government embarked on over the last two years had made existing banks liquid enough to support businesses to grow.

He said steps were also being taken to refocus the operations of the National Investment Bank (NIB) to support the industrial sector.

He mentioned the establishment of industrial parks in some parts of the country, stability in power supply and improvement in rail and road infrastructure as positive initiatives for local businesses to thrive.

Mr Kyerematen urged the AGI to collaborate with the Council for Scientific and Industrial Research (CSIR) to deploy innovative technologies to improve its managerial and technical competencies to make businesses competitive.

The President of the AGI, Dr Yaw Adu Gyamfi, said the summit was to buttress the point that stakeholders needed to collaborate to put local companies on their feet, especially in the wake of the coming into force of the AfCFTA agreement.

He said the AfCFTA provided an excellent opportunity for the government and the AGI to work together to benefit from the liberalised trade regime.

“We want the government to continue to work to improve on the business environment, so that local companies can also strategically position themselves to produce goods that will be needed by other countries,” he said.

Dr Gyamfi said the AGI was partnering the GIZ to launch an energy service centre to help provide sustainable energy for businesses.