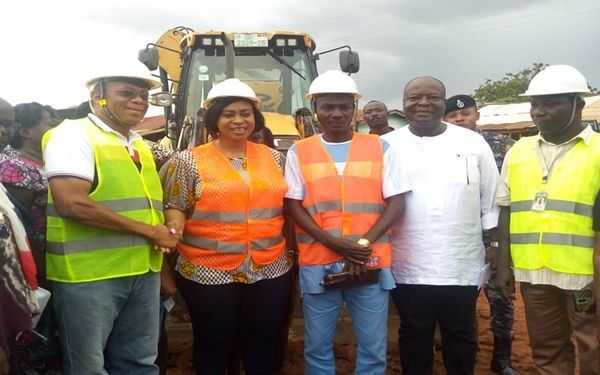 Works on the deplorable 2.9kilometer Old Ashongman-Abokobi road has started in earnest with engineers predicting to complete the project in twelve months’ time.

Construction of culverts as well as grading of the surface area to make the road network motorable for commuters were visibly seen when the Member of Parliament (MP) for Dome/Kwabenya, Hon. Sarah Adwoa Safo, accompanied by the Ga East Municipal Chief Executive, Janet Tulasi Mensah and some engineers and road experts from the Assembly visited the site on Wednesday, October 9, 2019.

This was shortly after the official sod-cutting ceremony at Old Ashongman Lorry Station for works on the 2.9km road project to commence.

The GH₵5,256,146.52 rehabilitation road project is being executed by Arimpa Limited and financed by the Government of Ghana.

Addressing residents and commuters along Ashongma-Abokobi enclave, Hon. Adwoa Safo who is also the first female Deputy Majority Leader of the Parliament of Ghana, expressed the belief that the completion of the road project will open the community up for business opportunities.

She told the gathering that she was elated to see residents heave a sigh of relief following the commencement of the project and further assured that more developmental projects were in the pipeline to address their needs after having been sanctioned by the President of the land, Nana Addo Dankwa Akufo-Addo.

“We called on previous government to as a matter of urgency, to rehabilitate these roads in the constituency. But it all fell on deaf ears despite the several attempts. Recently, you will all bare witness with me that, we have seen massive improvement in most of our road networks in the Dome-Kwabenya Constituency under the leadership of His Excellency, Nana Addo Dankwa Akufo-Addo. As a I speak, Government and Kuwait Fund for Arab Economic Development have signed a US$23.8million loan agreement to finance the rehabilitation of the Dome through Brekusu to Kitase Road Project. As a matter of fact, I am very elated that we are going to being works on this major road today”, he noted much to the applause of the gathering.

The deplorable roads in the Dome-Kwabenya constituency have in recent times been at the center stage of public discourse in the constituency. Some aggrieved residents who felt nature of the roads were negatively impacting on their health and businesses have on numerous occasions staged a demonstration and called on their lawmaker to come to their rescue.

Since 2018, some of the deplorable roads have been refurbished while others are at various stages of being rehabilitated.

Road projects which have been completed in the constituency include; asphalting of Taifa Township roads, Bitumen Surfacing of Haatso Supermarket-Agbogba Link road, Taifa-Burkina Road, and Haatso Video Club Area Road.

Speaking further on the matter, Hon. Adwoa Safo who is also the Minister of State In-charge of Public Procurement, pleaded with residents of Old Ashongman and Abokobi to be patient with the contractor executing project because of the inconveniences that will be created as a result of the construction.

The Ga East Municipal Chief Executive, Janet Tulasi Mensah, on her part said deplorable road networks in the Assembly is giving her sleepless nights and therefore appealed to the Government through Hon. Adwoa Safo to help facilitate the speedy mobilization for work to commence on the Pure Water- Ashongman Estate road which is part of the Sinohydro Project to be carried out in the Municipality.

“Currently, the road is being reshaped, as we have often done in the past, but with a little rain, our effort does not last to be appreciated”, she underscored.