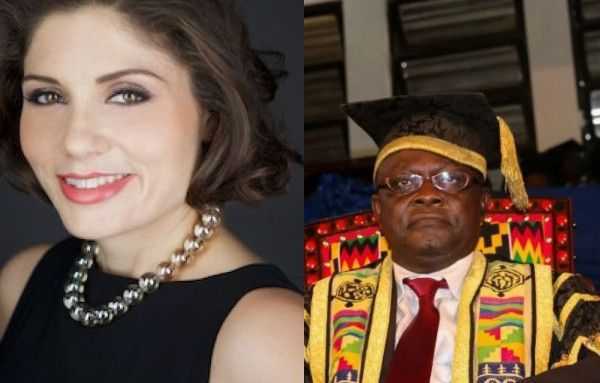 The Vice-Chancellor of the University of Ghana, Prof Ebenezer Oduro-Owusu, has denied sexually harassing Andrea Pizziconi, the CEO of Africa Integras.

Pizziconi in a tweet said she can relate to the sex for grades expose by the BBC because she was once a victim of sexual harassment.

She wrote: “I have remained mostly quiet despite the battery of attacks by Professor Ebenezer Oduro Owusu on my dignity. I was advised not to make waves and definitely not to raise the #metoo flag if I wanted to put the project back on track, which I do. Now I feel compelled to speak up and draw a direct line between this sex scandal and our derailed project”.

She claimed that Prof Oduro Owusu declined to work with her to save the Africa Integras project on the basis that she was “far too pretty to worry my little head about the project”.

She alleged that on one occasion when they met, the V-C ordered: “Turn around, everyone, I want to give her a proper hug.”

Andrea Pizziconi said that her refusal to kowtow to the pressure from the Vice-Chancellor “landed her in the headlines for years with attacks against her character and credibility despite the building sitting on campus for anyone to inspect”.

However, Professor Oduro-Owusu in an interview with Kwami Sefa Kayi on Peace FM’s morning show 'kokrokoo' denied the allegation insisting that as a servant of God and a learned person, he will not joke with his hard-earned reputation.


According to him, “we have never sat anywhere one-on-one because my policy is that we work as a team and, so, I don’t sit one-on-one with people and that is what she didn’t like. The last time she said she wanted to meet me one-on-one, I called the Registrar to join the meeting but when she realised that I was coming with others, she didn’t like that idea. I have never been in a secluded area with her – either in my house, office or hotel; never. I think she is just desperate and frustrated, off course she is bitter.”

Listen to the full interview in the video below