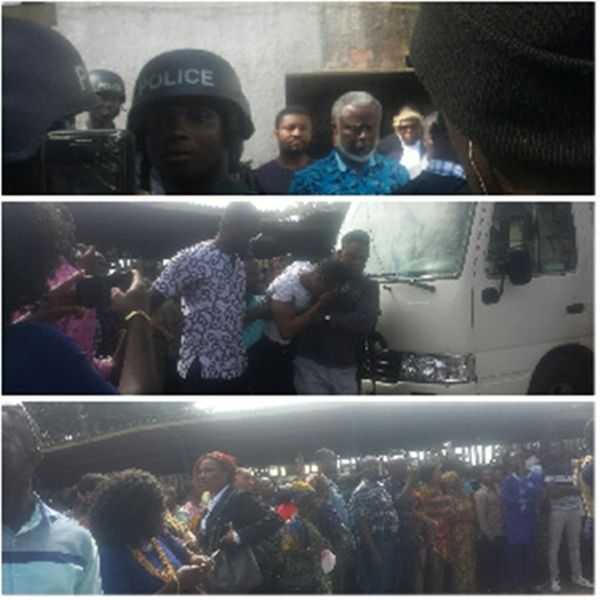 The many narrations being put out by persons suspected of planning to overthrow the government have prompted questions about the veracity of the defence by both the suspects and their counsel.

When news of the arrest of Dr. Frederick Yao Mac-Palm, the Proprietor of the Citadel Hospital at Alajo in Accra, and the subsequent stockpile of weapons and the production of locally manufactured firearms including improvised explosive devices (IEDs), were discovered, lawyers of the medical officer were quick to claim that the weapons, an assortment of foreign firearms including revolvers, were nothing but a plant by state agents.

However, the tacit admission by the accused persons’ lawyers that, indeed, weapons were discovered is reinforcing the prosecution’s claim of attempted coup.

There has been a heated debate about what will motivate state security agents to plant weapons on a doctor who was merely managing his private medical practice, without basis.

On Monday, a lawyer for seven of the accused persons, Victor Kodjoga Adawudu, in his attempts to secure bail for them, ended up admitting that some weapons were retrieved from his clients but claimed that they were in their possession for self defence.

The lawyer has always maintained at the Magistrate Court that his clients were innocent and that the prosecution did not have “watertight evidence” before the court.

At an Accra High Court where he fought for bail for them on Monday, Mr. Adawudu did not only admit that the accused persons procured guns but also told the court that they had gone to the Teshie Military Shooting Range to test the weapons.

Moving his application for bail, he told the court that Take Action Ghana (TAG) is an NGO registered by Dr. Mac-Palm which he uses for “medical outreach” programmes.

He told the court that as part of plans to raise funds for the group’s activities, they also have a social media platform where issues of national interest are discussed.

Mr. Adawudu claimed that members of the groups ‘suffered’ an attack during one of their outreaches at Damongo hence their decision to arm themselves.

It was a certain Sulley, he said, who suggested the acquisition of the weapons for protection, adding that it was on that basis.

He said it was on the basis of that the group invited Donya Kafui, aka Ezor, a blacksmith “to be repairing the guns.”

According to him, the said Sulley had been going to Kafui Donya in the Volta Region for gun repairs for a long time.

After the repairs came the testing at the Teshie range became the place of choice.

Mr. Adawudu said it was while testing the weapons that the shots attracted some soldiers who rushed to the scene and arrested the suspects.

The lawyer further told the court presided over by Justice George Buadi that the accused persons were not engaged in any plot to destabilize the country or overthrow the government.

When they were arrested, former President John Mahama ridiculed the suspected coup plot when he joined his party propaganda team and others in their attempt to rubbish the government’s claim.

He reduced what was in security circles a very serious issue to a matter of laughter when gracing the 13th Annual Residential Congress of the National Health Students Association at Korle-Bu soon after news about the plot broke.

“There was this challenge going on of people showing possible weapons that can be used in a coup d’etat.

“There was this one that was very intriguing because this was the wooden spatula that is used to stir ‘banku’ popularly called ‘Bankuta’….and I said well, possibly; that can be used to hit the guy at wherever you are going to attack, he may fall unconscious,” he mocked.

He wondered, as he put it, how syringe or bentua used in enema be used to stage a coup.

In another show, supporters of the suspects put out an array of cutlery to deride the coup allegation as being a display of frivolous items in the name of weapons.

As if that was not enough, the lawyers of the suspects, now vociferous on both social and traditional media, yet again claimed their clients were innocent and pawned in a political chess game being orchestrated by the state intelligence machinery.

“For those who understand security issues, it is amazing why IEDs and not side arms would be required for the self-defence of a medical officer and his accomplices now charged with treason,” a security expert told DAILY GUIDE.

Another defence, according to one of the two lawyers defending one of the suspects, ACP/Dr. Benjamin Agordzo, while speaking to the BBC is that his client was merely advising the suspected coup plotters on how to go about their planned demonstrations.

In his brief engagement with a cross section of the media on the premises of the Kaneshie Magistrate Court last week, ACP/Dr. Agordzo, donning his UN badge beret, referred to a WhatsApp communication as being the source of his arrest.

These, he said, were not germane to the charges of coup plotting levelled against him.

He also said nobody could break him down and that he was as strong as anything. He was merely living up to his narratives was what some observers said about his ‘media show’.

The civilians who have already been charged are Dr. Frederick Yao Mac-Palm, a doctor and the alleged mastermind behind the coup plot; Donya Kafui, aka Ezor, a local weapon manufacturer (blacksmith) from Alavanyo, and Bright Allan Debrah Ofosu, aka BB or ADC.